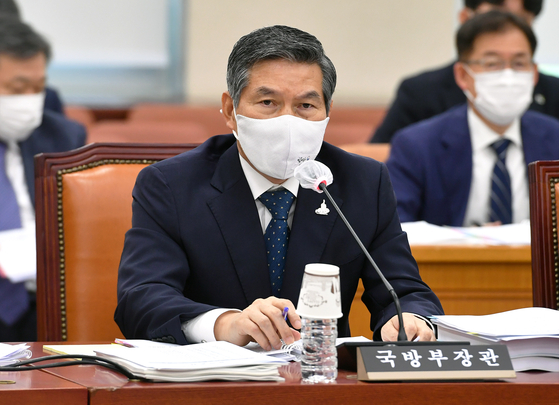 
Minister of National Defense Jeong Kyeong-doo landed himself in hot water due to his excuse for opting out of a defense chiefs’ meeting with the United States and Japan last week.

In a phone conversation with the JoongAng Ilbo Monday, Jeong gave his reasons for not attending the meeting, saying he would have had to self-quarantine after returning from the conference, which he could not do because he was too busy arranging for his imminent departure as minister.

U.S. Defense Secretary Mark Esper and Japanese Defense Minister Taro Kono held a bilateral meeting at the Andersen Air Force Base in Guam on Saturday. Korea had also been invited to the conference, which was originally meant to be a trilateral affair, but Seoul declined the meeting.

According to Jeong, a subsequent self-quarantine period would have forced his absence from the inauguration ceremony for his successor as Korea’s defense chief.

Army Chief of Staff Gen. Suh Wook was tapped by President Moon Jae-in to succeed Jeong, though his parliamentary confirmation process has yet to begin. 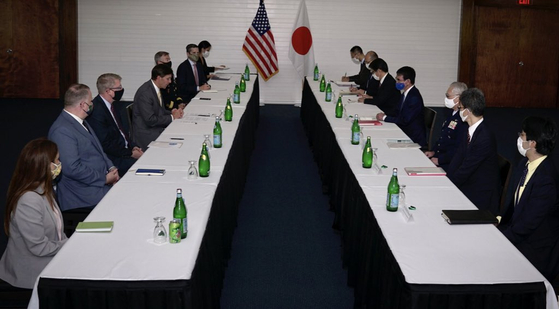 U.S. and Japanese defense chiefs and officials hold a bilateral conference at the Andersen Air Force Base in Guam on Saturday. South Korea was originally invited to the meeting but declined to attend. [U.S. DEPARTMENT OF DEFENSE]


Jeong’s excuse appeared to contradict with Korea’s quarantine laws. Diplomats or civil servants who visit foreign countries for work are exempt from a mandatory 14-day self-quarantine at home, as long as they submit the required form to the Korea Centers for Disease Control and Prevention (KCDC) beforehand.

In such a case, officials take polymerase chain reaction (PCR) tests for the virus and are actively monitored through a smartphone application, but are not required to quarantine at home.

Foreign Minister Kang Kyung-wha undertook such a process after her return from a three-day trip to Germany last month.

Jeong’s failure to attend the defense chiefs’ meeting prompted opposition lawmakers in Seoul to slam the government for its lax stance on a key security gathering.

At a parliamentary briefing Tuesday, Kang said a scheduling issue between Korean and U.S. defense chiefs had caused Seoul to opt out of the meeting, but added that the allies were “communicating daily on various different levels.

“We expect to hold sufficient and intimate consultations on bilateral issues including North Korea through our yearly Security Consultative Meeting [SCM],” Kang added, referring to a defense meeting between the allies scheduled for November.

Jeong also told the JoongAng Ilbo that he expected his successor to confer with his U.S. counterpart at November’s SCM.

Security analysts in Seoul, however, said Seoul was making a mistake by failing to seize an opportunity to coordinate its aims with the United States and Japan ahead of a major transition period expected to occur with the U.S. presidential election in November.

“Regarding sensitive issues related to North Korea and China, our positions will hold persuasion if they are delivered personally, but could convey the wrong message to the United States if we are seen as avoiding them,” said Kang Jun-young, head of the Center for International Area Studies at Hankuk University of Foreign Studies (HUFS).

“[Jeong] should have attended the meeting to show that South Korea and the United States are closely connected with issues concerning North Korea and China.”

One government source in Seoul suggested the decision to opt out of the meeting may not have been the sole decision of the Defense Ministry.

“The Blue House may have felt uncomfortable about arriving at a common agenda with the United States and Japan on the threat stemming from Chinese missiles,” the official said.

The U.S. and Japanese defense chiefs did reach a consensus at the meeting on China’s attempts to thwart the status quo in the East and South China Seas through force.