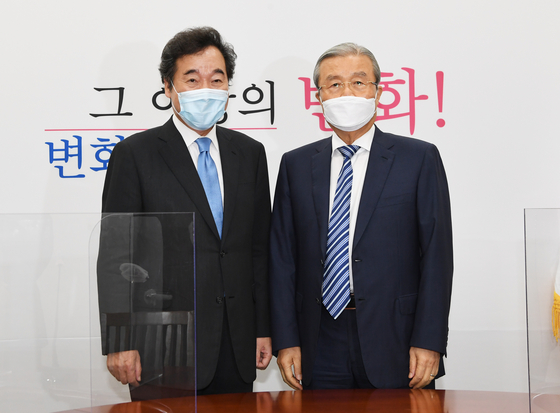 
In political circles, all eyes were on the first meeting between the heads of Korea's top two parties on Tuesday, to see if their decades-long friendship can bring about bipartisan cooperation in a National Assembly dominated by the ruling party.

“Because the makeup of the Assembly is such that we have not seen before, it has been difficult to hope for a comprehensive decision-making process,” Kim told Lee in the meeting. “But I think this can change with the commencement of the regular session of the Assembly, and especially because you have been elected the new chairman in the ruling party.”

The Assembly was at an impasse for weeks after it opened its extraordinary session in June, marred by partisan disagreements over the chairmanship of 18 standing committees at the Assembly, as well as at the legislation.

The DP, which has 176 seats in the 300-seat Assembly, ended up electing members of the DP to chair all 18 committees. DP lawmakers also unilaterally passed several contentious bills just a few days before the end of another extraordinary session in August, including the controversial real estate market reform bills that would raise taxes on multiple house owners.

Tuesday's meeting was the first between Kim and Lee since Lee was elected party chairman on Sunday, and also the first day of the regular session of the Assembly. Kim told Lee that the ruling and opposition parties at least seem to see eye-to-eye on the need to pass supplementary budget bills to dole out a second batch of Covid-19 relief grants. The government provided funding of up to 1 million won ($844)ㅡ to every Korean household in May.

“I think that’s an area that we can start working on together, and which will hopefully lead to other bipartisan agreements,” Kim said.

Lee readily agreed with the last comment, but it wasn’t immediately clear from his response whether the DP's dominance of the standing committees would be revisited.

“I don’t think we can spare the time to repeat what we did earlier, spending months on meandering negotiations at the beginning of a session,” Lee said. “I ask for your cooperation in helping the ruling party provide a responsible and punctual response to the emergency the country finds itself in.”

But Lee also alluded to his friendship with Kim, which dates back decades, by adding that he wishes to call on Kim in another setting, “away from all these reporters and publicity, like old times.”

Lee’s acquaintance with Kim dates back to around 40 years, to when Lee was a reporter and Kim his source in the Chun Doo Hwan government. The two are said to have maintained cordial terms, with Lee often seeking Kim’s advice from time to time.

“I hope to seek your guidance once again this time, as you have always provided it to me,” Lee told Kim during the meeting.

Some members of the opposition appeared hopeful and called on Lee to stop the DP from dominating the procedures at the legislature.

“We have high hopes for Lee to bring about a more balanced and representative operation at the Assembly, through cooperation between the ruling and opposition parties,” UFP floor leader Joo Ho-young wrote on his Facebook account on Sunday, congratulating Lee on winning the chairmanship of the DP. “The president called on both parties to work together at the Assembly to gain the public’s trust. I hope that Lee will step up to this role.”

But a meeting between Joo and DP floor leader Kim Tae-nyeon, scheduled to take place later in the afternoon on Tuesday, was canceled at the last minute.

“We got a call around 1:30 p.m. from the office of Joo to say they’d like to cancel the meeting,” Kim’s office told local media outlet News1.

Joo was said to have taken issue with a suggestion from the speaker’s office about introducing a bill to allow the Assembly to hold session meetings and committee meetings virtually.

“The office of the speaker communicated in yet another one-sided manner, as if it’s a done and decided matter already,” Joo's spokeswoman, Bae Hyun-jin, told News1. “They should be giving both parties enough time and room to discuss the possibility of such bills together.”