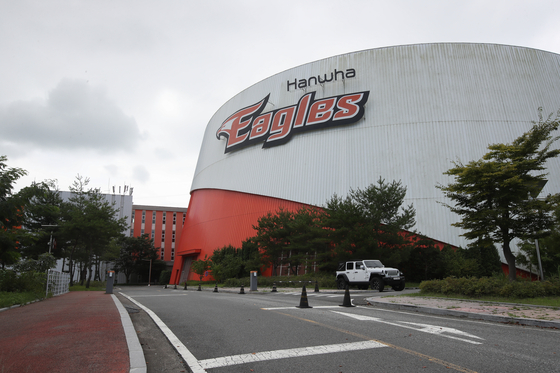 
After nearly four months of non-stop baseball, the KBO's luck may be starting to run out.

Despite the coronavirus pandemic disrupting professional sporting leagues around the world, the KBO was able to get away with a delayed start and has continued since May 5 with only the long, wet, humid summer occasionally stopping play.

But now the league faces a much bigger threat. On Monday, it was reported that Hanwha Eagles pitcher Shin Jung-rak has tested positive for Covid-19, becoming the first professional athlete to test positive in Korea.

Officials said that since Aug. 29, Shin has been suffering with a fever and headaches. As soon as his result came out positive, the KBO’s Futures League, where Shin had mainly been playing recently, canceled the Eagles’ game against the Doosan Bears on Tuesday.

Shin’s last appearance in the KBO was back on June 27, when he came out of the bullpen to toss a scoreless two-thirds of an inning during a game against the KT Wiz. Following that game, Shin was sent down to the Futures League. For this season, Shin has a 9.00 ERA with one loss throughout 16 games in the KBO.

All Eagles’ Futures League players and coaching staff have been tested for Covid-19. So far, 40 players and members of staff have reportedly tested negative.

Two Eagles pitchers who were recently called up to the KBO also tested negative for the virus, as did two other pitchers they had been in close contact with. No other staff or players at the KBO team are believed to have been tested. Although the two pitchers tested negative, they are still in quarantine.


The Eagles' KBO team arrived as scheduled at Jamsil Baseball Stadium in southern Seoul for their regular season game against the Bears on Tuesday. Although there were talks of cancellation, the game went ahead as planned.


Shin is not thought to have been in contact with any other KBO players, so disruption to the top league is unlikely.

All players and staff at the Eagles' Futures League team are expected to remain in self-isolation until the local authorities have worked out how Shin was infected. The Eagles’ Futures League stadium, facility and players’ dormitory, all in Seosan, South Chungcheong, have been sterilized.

Until all tests are completed, the Twins and Eagles’ Futures League teams will not be playing. Canceled games will be rescheduled later in the season.

While the MLB and other sporting leagues around the world have seen a number of players testing positive for Covid-19, Korea hasn't seen a single case thanks to its disinfection procedures. But with Shin’s positive test, that is no longer the case.

The KBO requires all players and staff to wear masks in dugouts, has banned spitting and told players not to visit bars while on the road. Players who are caught breaking these rules will be fined.