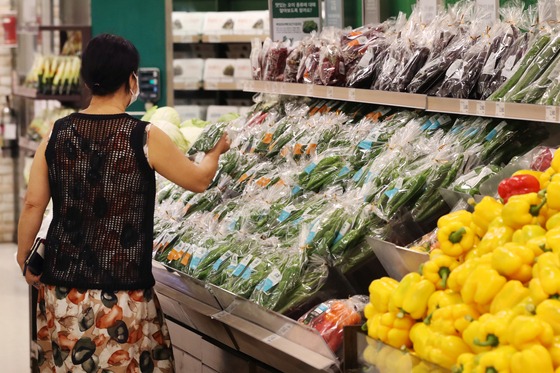 A shopper in the vegetable section of a discount mart in Seoul on Aug. 27. The longest streak of rainfall in August drove up vegetable prices. [YONHAP]


Inflation in August hit its highest level since the pandemic started, though it remained below 1 percent.

Vegetable prices rose rapidly because of the heavy rains, with Napa cabbage prices up almost 70 percent, while the price of jeonse, or long-term rental deposits, also increased at a brisk pace.

In May, the reading was negative, only the second such minus year-on-year reading since the data were first compiled.
The statistics agency said though consumer prices were up in August, tightened social distancing rules and the resurgence of the coronavirus capped the increase.

Government policy contributed to the weak inflation, including the expansion of free tuition for high school students.

Processed food prices rose 1.4 percent, with the price of services up 1.5 percent. Restaurant prices increased half a percent.

Statistics Korea noted that although consumer prices of manufactured goods continued to fall, the rate of the decline has been slowing since May, when they fell 2 percent.

The latest inflation report reflected the impact of the longest-ever rainy season.

Agriculture, fishery and livestock prices in August rose 10.6 percent. It is the sharpest year-on-year rise in three years.

The statistics agency projected the rises in food prices will likely continue this month as a result of typhoons and the Chuseok holidays.

Landlords have been raising apartment rents and jeonse prices following the passage of a tenant protection law in July that limits increases and guarantees contract renewals.

Inflation over 3% for fourth month in a row