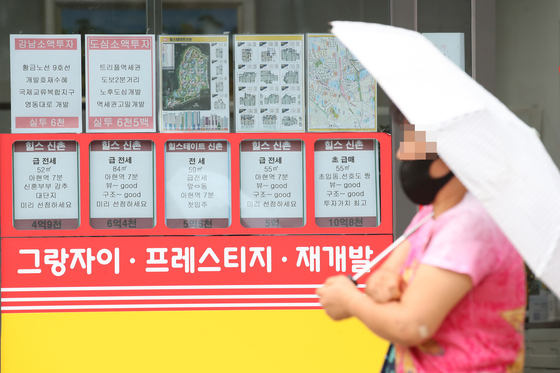 A real estate agency in Seoul posts rents on Wednesday. According to the Korea Appraisal Board, jeonse prices rose at the fastest pace on month in nearly five years as landlords increase prices ahead of the new regulations that limit rent increases and require contract renewals. [YONHAP]


A crack team is being formed by the government to go after illegal activity in the property market. It will have extensive investigation authority and the powers to directly punish offenders.

The goal is to form the new unit by the end of this year.

While the agency has not yet been named, its working title is “real estate transaction analysis unit.”

Finance Minister Hong Nam-ki on Wednesday said the new agency is an expansion of a task force created earlier this year. The task force has 13 officials from seven government bodies. The Land Ministry, the police, the prosecutors, the tax agency and the Financial Supervisory Service are represented.

The Finance Minister said the new real estate crackdown agency will not be independent.

“It will be a government organization created within the government,” Hong said. “We plan to reference the Korean Financial Intelligence Unit [KoFIU] and the Capital Market Investigation Unit.”

Both are under the Financial Services Commission (FSC).

Finance Minister Hong stressed there is a need to expand investigation capacity.

“We have concluded there is a need for systematic counter actions, as such actions against market disruption should not end as a one-time event,” Hong said. “It is a fact there is a limit with the current team in addressing the numerous illegal acts committed throughout the country.”

The new agency will not only monitor the real estate market and investigate, but it will also be given the authority to penalize violators. It will have access to financial information needed for investigations.

The government said it will pursue legislation for the expanded powers and authority.

Concerns over excess oversight by the government were downplayed by the Finance Ministry.

“While there are concerns about the newly establishing agency, the purpose will be swiftly acting against illegal acts that have been committed by expanding the current task force,” Hong said.

The Finance Minister noted that the real estate market has been showing signs of stability since antispeculation measures were taken, including higher taxes on landlords and loan restrictions.

He added that the government will further strengthen its investigations into destabilizing speculation.

The first focus will be companies that provide rental housing, as some of these are fronts for individuals seeking to take advantage of funding available to corporations. Investigations will be conducted into these structures from this month to the end of the year in cooperation with local governments.

Violations of recently enacted tenant-protection legislation will also be investigated, especially those related to maximum rent increases and contract renewal.

“As we have warned earlier, we will take necessary steps, including levying fines, cancelling business licenses and even recouping the tax benefits that were previously given when violations are made,” Hong said.