In Bridezilla vs. Act of God, nobody wins

In Bridezilla vs. Act of God, nobody wins 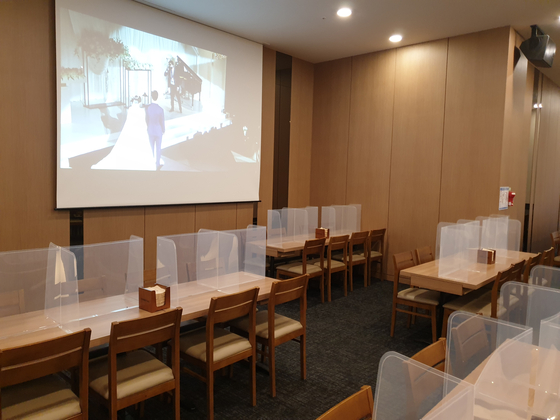 A real-time display of the wedding plays on a large screen on Sunday at the banquet hall of a wedding venue in Seoul. Since the initiation of Level 2 social distancing, all buffet services have stopped. [JEONG JIN-HO]


The wedding business is the Wild West for those who try to cancel or delay ceremonies due to the pandemic, with wedding halls making extortionate demands on those forced to adjust their plans and Korea's legal system stepping back and suggesting the two parties just duke it out.

It would make a good reality show.

A 34-year-old soon-to-be bride is outraged at the policies of the wedding hall she booked. The May wedding for 200 could not be held, and she was told that she had to rebook for July or August, peak season and thus more expensive, or cancel the contract and sign another for a later date.

To add insult to injury, the wedding hall took a 15 percent fee when she decided to cancel.

It only got worse. She signed a contract for an October ceremony, but the terms were not the same as the earlier agreement. The deposit was doubled to 2 million won ($1,700) and a graduated scale for cancellation charges was introduced, with the range running from 10 percent to 30 percent.

“It’s hard to decide how many people to invite, since the situation is quite up in the air,” the bride-to-be said. “It is also frustrating that the wedding hall’s compensation for the lack of buffet services falls short of the meal costs.”

She contacted the Korea Consumer Agency (KCA), but the KCA wasn't much help. It simply said she should negotiate with the wedding hall.

“The wedding hall said that I need to follow the regulations of the wedding hall. The general rules that currently exist around wedding postponement are not legally valid. They are merely recommendations,” she said.

Many are in the same shoes.

The Seoul Metropolitan Government on Tuesday said it will release specific criteria for wedding cancellation charges after consulting with the nonprofit Wedding Hall Organization and the Korea National Council of Consumer Organizations. The key policy is that if Level 2 lasts until the end of the year, cancellation fees will be prohibited until Feb. 28, 2021.

An office jointly operated by Seoul Metropolitan Government and the Korea National Council of Consumer Organizations will be responsible for conflicts regarding wedding hall cancellation charges in Seoul.

The Fair Trade Commission had earlier submitted requests to the Wedding Hall Organization so that weddings could be postponed for up to six months without a fee, but the lack of teeth and specifics in the guidelines has frustrated many young couples.

“The local government will assist with mediation after those interested submit the wedding contract and content of damages to the Gyeonggi Province Customer Information Center,” said Gyeonggi Governor Lee Jae-myung in a Facebook post on Monday. “If mediation is not successful, the provincial government will appeal to the KCA on their behalf.”

Gwangju Mayor Lee Yong-seop ordered measures for couples who have lost money ahead of their weddings. Gwangju is planning to receive civil complaints at the city government’s Public Service Center.

Since last Friday, Busan has been operating a call center to mediate conflicts between wedding halls and consumers due to contract disputes.