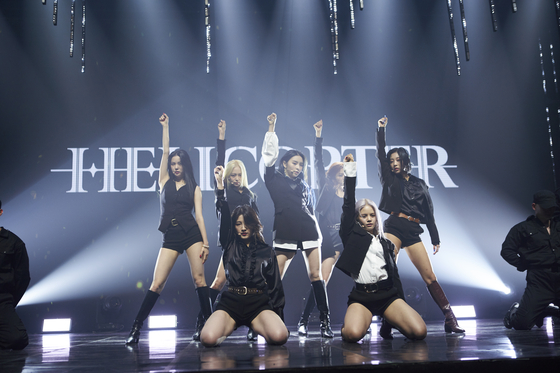 Girl group CLC performs its new track on Wednesday for the online showcase of its new single "Helicopter." [CUBE ENTERTAINMENT]

Girl group CLC has made its comeback, this time as seven pilots ready to take off in their helicopter on a journey to find answers about an uncertain future.

CLC held an online media showcase to celebrate the release of its fifth single, "Helicopter," which dropped at 6 p.m. on Wednesday.

“Helicopter" is a song in the genre of trap pop and EDM powerhouse, which sends a powerful message of fighting off the fear of uncertainty that the future holds by challenging listeners to take off and fly high.

Producer Shin Hyuk, who has worked with numerous top artists including Justin Bieber, TVXQ, and Exo, produced the song and a global hit song maker Melanie Joy Fontana, who worked with BTS, Twice, participated in composing it.

During the online showcase, the group called the new song an “autobiography of the group CLC.”

“For the first time, we tried to tell our story in our song,” member Ye-eun, who helped to write the lyrics, said. “As it was my first time writing lyrics, the process was really challenging. But since the song is about standing up against challenges, I tried my best to work on something that I’ve never done before."

An English version of "Helicopter" was also released for international fans to enjoy.

“I hope our global fans can equally enjoy our song and feel the energy that we tried to convey,” Eunbin said.

This is the group’s first release in a year since its single "Devil" dropped last September.

“It's our first comeback in a year, and the reason why we returned with a single instead of a full-length album is because we wanted to focus our efforts solely on one song, which contains our story," the leader of the group, Seungyeon, said.

The online showcase revealed the full music video of “Helicopter” followed by CLC’s live performance of “Helicopter” on stage. CLC presented its powerful and dynamic performance with unique choreography that resembled a helicopter, such as hand movements that mimicked a propeller.

"We have prepared to perform with male dancers on the stage for the first time to show our fans how we have matured,” Seungyeon said.

“We paid a lot of attention to the performance. We hope CLC becomes a representative K-pop group with the best performance abilities,” Elkie said.

“Everyone around the world is having a hard time as the Covid-19 pandemic continues. By listening to our energetic song, we wish for everyone to find hope and ‘stand up’ again, as our lyrics go,” Yujin said.

"The situation is not good right now because of the pandemic, but if we get a chance, we want to have a world tour to share happiness and fun with our fans around the world,” Sorn said.

CLC debuted in 2015 with its EP “First Love,” gaining much attention from the media as Cube Entertainment's first new girl group in six years since girl group 4Minute debuted in 2009.