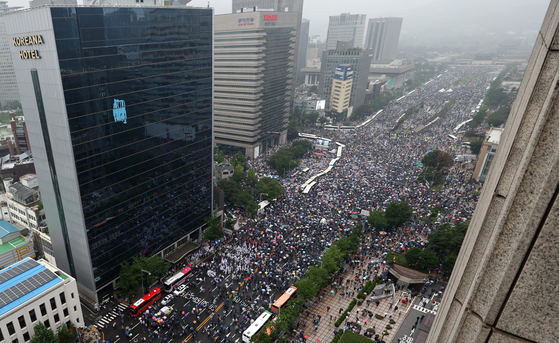 Antigovernment protesters fill up Sejong-daero, the main street of central Seoul, on Aug. 15. The Seoul Metropolitan Government had banned street rallies to stop the spread of Covid-19 infections, but the Seoul Administrative Court lifted bans on two rallies on Aug. 14. Although the organizers told the court to hold smaller events, tens of thousands gathered from around the country. [YONHAP]


The Moon Jae-in administration faces growing criticism for blaming the latest resurgence of coronavirus infections on a judge who allowed street rallies to go forward last month, with administration officials accused of undermining the independence of the judiciary.

The Korean Bar Association on Monday issued a statement criticizing a round of fierce condemnations of Judge Park Hyung-soon of the Seoul Administrative Court, who allowed street demonstrations on Aug. 15 to go forward. The public health authorities later said the massive rallies played a key role in the rapid growth in new infections.

In its statement, the association said it is worried that the judiciary’s independence was jeopardized after top members of the Moon administration condemned the judge’s ruling to allow the rallies. It said the political attacks have fueled public rage against the judge.

Although the association suggested the court should have made a more “prudent” decision by giving more weight to the risk of infections as it relates to freedom of assembly, the statement stressed that the judge is still guaranteed his independence in making a ruling.

“Independence of the judiciary, particularly independence of a judge, is the basis of protecting constitutional order and democracy and realizing the rule of law,” the association said.

It also said personal attacks on judges will make it impossible for them to preserve their beliefs. The association warned that judges will be increasingly pressured to please the public if the attacks aimed at Park continue.

Ahead of the Aug. 15 Liberation Day, 10 organizations submitted applications to the Seoul Administrative Court to lift the Seoul Metropolitan Government’s ban on street rallies. On Aug. 14, Park granted permission to two rallies — one organized by former Rep. Min Kyung-wook, and another by a conservative group, Ilpamanpa.

After the judge’s rulings faced fierce backlash, the court made the rare decision on Aug. 21 to issue a statement detailing its rationale for lifting the bans.

According to the court, Min’s group asked for permission to hold a rally of 2,000 people near Seoul City Hall on Aug. 15. Judge Park ruled to allow the event, noting that Min’s group had enforced preventive measures such as measuring temperatures and sanitizing hands during its earlier rallies.

Judge Park also cited a massive rally attended by 10,000 people that had taken place in Yeouido, western Seoul, on Aug. 7, for which there were no reports of infections due to the event. In the absence of evidence that infections were spread at an outdoor gathering, the court must allow the rally, he concluded.

Another conservative group, Ilpamanpa, applied for permission to march and hold a rally attended by 100 people from 9 a.m. till 9 p.m. in central Seoul on Aug. 15, the court said.

Judge Park granted it permission, because the protesters would have been able to respect the social distancing guidelines with just 100 people in a large, open space.

Actual turnout, however, was far larger than the plan. About 10,000 people, according to the rally organizer, attended the protest. The massive gathering turned into a public health nightmare. Infections quickly surged, forcing the government to tighten social distancing measures in the greater Seoul area and eventually throughout the country.

Members of the ruling Democratic Party (DP), in turn, condemned Park. Rep. Woo Won-shik said Aug. 22 that the court must admit to its error and apologize to the people for allowing the rallies.

Another lawmaker, Rep. Lee Won-wook of the DP, proposed a bill, named after the judge, that would strictly ban rallies inside areas where gatherings have been restricted by the Infectious Disease Control and Prevention Act. The bill proposed requiring the judge to listen to the opinion of a public health authority before granting an exception.

Top officials within the Moon administration also joined the criticism. Prime Minister Chung Sye-kyun, who once headed the legislative branch as the National Assembly speaker and is now the second-highest official in the administrative branch, condemned the judge's decision on Aug. 25. 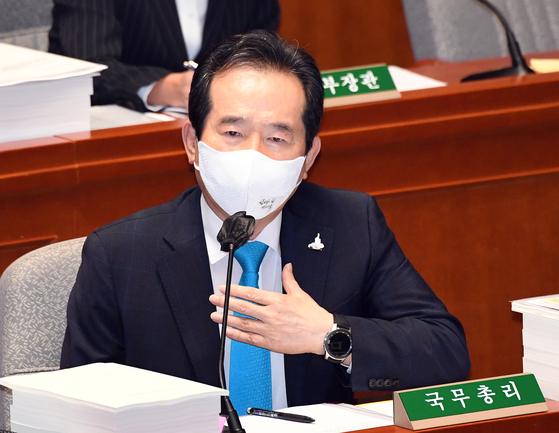 
“Preventive measures all collapsed, and we are in a situation we never wanted to even imagine,” Chung said during a committee meeting at the National Assembly.

“Any reasonable person could see that a massive rally would take place, differently from the organizer’s application,” Chung said. “It is regretful that the court failed to see this. We are facing a consequence that will come at an astronomical economic cost. This is so wrong.”

“I don’t think the judge made the ruling to spread Covid-19, but it was a wrong decision that caused the resurgence,” Chung said. “The court allowed the rallies and deprived the police of an opportunity to block the protests. Now, infections are spreading nationwide.”

Chung also dismissed criticism from the opposition lawmakers, who argued that the government had caused people to let their guards down by designating Aug. 17 as a temporary holiday, allowing gatherings of churches and distributing coupons to fuel consumption.

“It is wrong to connect the pandemic with the president’s approval to ease social distancing measures,” he said.

“It is regretful that the court had taken the issue too lightly,” Choo said in a meeting of the Judiciary and Legislative Committee on Aug. 25.

A petition was filed through the Blue House’s petition board on Aug. 20, demanding the dismissal or impeachment of Judge Park to hold him accountable for the ongoing resurgence of infections.

As of Tuesday, it had attracted 341,622 signatures. If a petition receives more than 200,000 within a month, the Blue House is supposed to offer a reply.

“Judges can be affected by strong comments by politicians, but we will do our best to not be affected by them,” a judge in a Seoul court said. “The people’s criticisms can be accepted as freedom of expression, but the prime minister’s criticism is different.”

A lawyer and former judge said the administration and the ruling party went too far.

“They seemed to think the judiciary is under the supervision of the executive branch,” he said. “They may think we are public servants who must listen to their orders.”

“We believe the judiciary should have issued a statement first, not us,” said a lawyer with the association.

On Tuesday, Supreme Court Justice Cho Jae-youn, the head of the National Court Administration, told the National Assembly that the Seoul Administrative Court allowed the rallies after a serious deliberation.

Rep. Back Hye-ryun of the ruling DP asked Cho about his opinion on the growing public petition to dismiss Park. “I thought the judge had a serious deliberation before making the rulings,” Cho said.