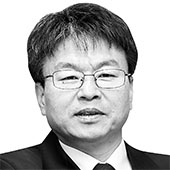 
Kim Won-woong, president of the Heritage of Korean Independence (HKI), has been regarded as a maverick even among the progressive camp. He confounded the Roh Moo-hyun government by announcing that the two Koreas had agreed to stage a peaceful inter-Korean sports competition in Jeju upon returning from a visit to North Korea in April 2003. Rumors quickly spread that he might have been sent to Pyongyang by the progressive Roh administration as a “special envoy.” Moon Hee-sang, then President Roh’s chief of staff, drew the line by saying Kim had visited Pyongyang on his own. Moon blamed him for splashing cold water on Roh’s planned state visit to the United States the following month.

President Moon Jae-in has a strong attachment to the national anthem. In a television debate before the 2012 presidential election, he kept his distance from the left-wing United Progressive Party led by Lee Jung-hee, vowing not to join hands with “forces that deny the national anthem.”

But President Moon sat quietly when Kim publicly insulted the national anthem by calling Ahn Eak-tai, the composer of the song, a “national traitor” during a ceremony for the 75th anniversary of Korea’s liberation from Japanese colonial rule on Aug. 15. The Blue House said Kim’s address had nothing to do with the presidential office. Has Moon’s view changed so much over eight years? Or perhaps, he might have chosen to keep silent in consideration of the sentiments of the pro-Moon group.

In addressing the Covid-19 crisis, the Moon administration also prioritized ideological reasoning over quarantine. The Korea Centers for Disease Control and Prevention (KCDC) has repeatedly called for an entry ban on Chinese visitors, but the Blue House and Foreign Ministry opposed the move so as not to upset Beijing based on their pro-China stance. If Seoul had taken preemptive measures of sealing borders at the time — as effectively done by Taiwan and Vietnam — it could have prevented the first outbreak that swept the southern regions of Daegu and North Gyeongsang.

The government is also accountable for the second wave of Covid-19 cases. Moon’s approval rating has been dipping due to public backlash over his administration’s real estate measures. Then Moon suddenly announced that he would make Aug. 17 a temporary holiday in order to allow a “valuable long weekend for people fatigued by the coronavirus.” Even after the Bank of Korea released negative data — minus 3.3 percent growth in the second quarter — the government claimed our economy fared “miraculously well” against the odds. But from Aug. 14, the first day of the three-day-long holiday, daily infections jumped to three-digit numbers. The catastrophe resulted from the Moon administration’s excessive desire to bolster the economy and control the Covid-19 spread at the same time.

Jung Eun-kyeong, director of the KCDC, said she had agreed to the holiday without a separate review. But her explanation goes against her usual stance. She told reporters that she disliked holidays as they could be instrumental in spreading the virus and get in the way of a fast response.

The conservative camp worsened the matter. The Sarang Jeil Church, under outspoken antigovernment pastor Jun Kwang-hoon, pressed ahead with a rally in Gwanghwamun Square on Aug. 15 even as some of its churchgoers tested positive. The serious ideological conflict has provoked extreme action.

A Seoul Administrative Court judge’s ruling is also regretful. The judge allowed church followers to stage a rally in Gwanghwamun because “there had been no cases of Covid-19 spread in outdoor assemblies.” The court judgment could have been different if it had sought opinions from KCDC experts. KCDC director Jung and her deputy had consistently warned of “serious consequences” from the long holiday and assemblies in downtown Seoul.

The progressive front dealt with disasters like the Sewol ferry sinking and virus outbreaks relatively well. Some on SNS sneered that the liberal Moon administration was “best geared for disasters” and that “The unhappier people become, the happier the government becomes.” On the other hand, the conservative front stumbled every time.

The opposition United Future Party (UFP), which has changed its name to the People Power Party (PPP), said that signs of a second outbreak were visible even before the rallies. However, its rhetoric is useless as the extreme rightist groups have already been stigmatized for causing the resurgence of Covid-19 cases. Public fury grew after some churchgoers refused to take tests and went in hiding.

Those who had turned to the conservative front after being demoralized by the economy, thanks to the government’s income-led growth policy and soaring real estate prices, are turning their backs again following the outbreaks from Gwanghwamun. Heedless and distasteful speech from PPP politicians has also added to the apathy.

It is time for the party and its interim leader Kim Chong-in to practice “political distancing” as much as social distancing. They must keep their distance with extreme groups. Ancient sage Confucius said rotten wood cannot be carved, and rotten soil cannot mend the fence.