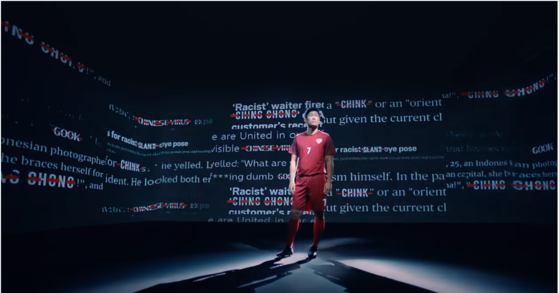 Park Ji-sung stands in a room with racist slogans projected on the walls in a new "Shoot For Love" video. [SCREEN CAPTURE]


Legendary footballer Park Ji-sung called out rising levels of racial discrimination in a video posted on YouTube on Aug. 30.

In the video, produced as part of the "Shoot For Love" campaign, Park is filmed standing in a room with racist insults projected on every wall, including “Chinese virus,” a term used by some conservative politicians including U.S. President Donald Trump to refer to the coronavirus.

“Racial discrimination has increased significantly in recent times. Since the outbreak of Covid-19, anti-Asian racism has become more prevalent than ever. We need to stand up against all forms of racism and kick racism out now,” Park says in the description of the YouTube video.

Park, who retired in 2014 after a hugely successful international career, now serves as a club ambassador for Manchester United and has often spoken out against racism in football. Both Park and Son have received racist abuse while playing for their English Premier League clubs.