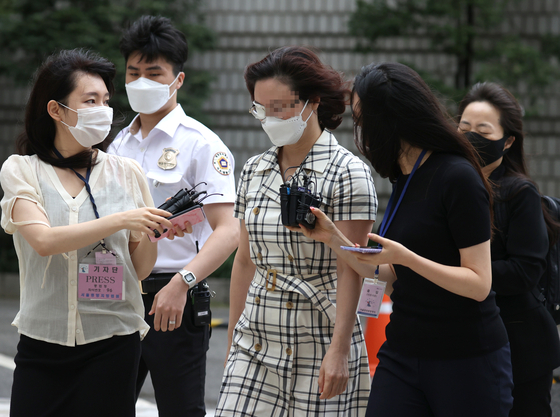 
Under questioning by prosecutors, former Justice Minister Cho Kuk on Thursday invoked spousal privilege to refuse to answer all questions in his wife’s trial for multiple charges of academic and financial fraud.

Cho took the witness stand in the trial of his wife Chung Kyung-sim, an English professor of Dongyang University, at the Seoul Central District Court on Thursday. It is the first time that the couple showed up together in a trial.

Chung has been charged with forging academic records for her children’s college and graduate school applications, making investments based on insider information and ordering the destruction of evidence. She has pleaded not guilty. 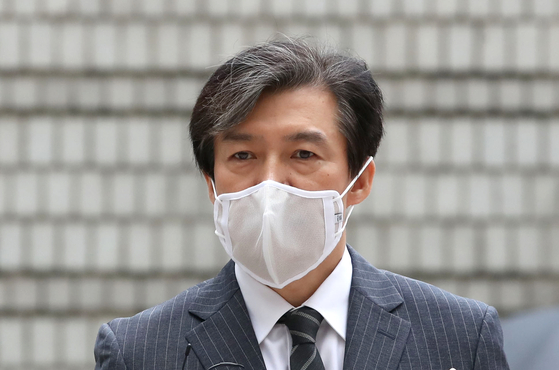 
After sitting down at the witness stand, Cho asked to be allowed to read a statement explaining why he wants to refuse to testify as a witness.

“I would appreciate the opportunity to read this one-and-a-half-page statement,” he said before taking his oath.

The three judges presiding over Chung’s trial read the statement first and told him that he cannot read the first part, because it has nothing to do with his decision to refuse to testify as a witness. He was allowed to read from the third paragraph of the second page.

“In this courtroom, the accused is my wife, and my childrens' names are also listed in the indictment,” Cho said. “In a separate trial, I was indicted as a co-conspirator of my wife, and my trial is currently ongoing.”

He then said he wants to invoke spousal privilege, based on the Criminal Procedure Act, to refuse to answer the prosecution’s questions.

Article 148 of the Criminal Procedure Act says “a person may refuse to testify when such testimony may be the cause of criminal prosecution or public action, or conviction for him or her or a relative."

Cho also said he has long promoted the importance of the right of a witness to refuse to testify.

“But there are still some biases about exercising this right,” he said. “I hope this courtroom is free of those biases.”

The prosecution was critical of Cho’s decision.

The prosecution said Cho had refused to answer any questions during the investigation, but that it had an expectation to hear his testimony because he had repeatedly made public pledges that he will lay bare the truth in the courtroom.

Cho then asked the court to give him a chance for a rebuttal. Judge Im Jeong-yeop, however, rejected his request.

“You are a witness who answers the questions of prosecutors and lawyers. You are not here to say whatever you want to say,” Judge Im said.

Throughout the court session in the morning, the prosecution asked Cho more than 100 questions.

“I will plead Article 148 of the Criminal Procedure Act,” Cho replied to every question.