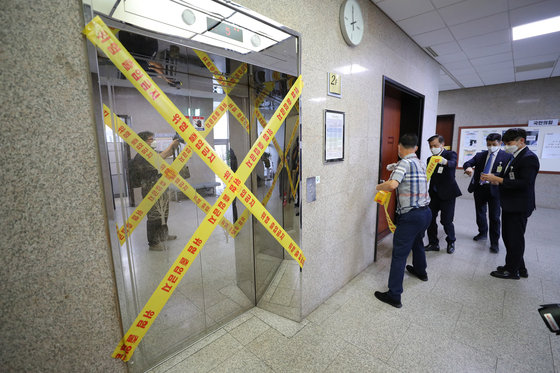 An elevator on the second floor of the National Assembly’s main building is closed Thursday after an official from the main opposition People Power Party tested positive for the coronavirus. [NEWS1]

New cases of the coronavirus dipped to 195 Wednesday, the first time in 17 days that the daily figure fell below 200.

The last time Korea had under 200 new infections was Aug. 16, when 197 cases were detected nationwide. On Tuesday, 267 infections were found.

Minister of Health and Welfare Park Neung-hoo said Thursday that the country managed to subdue a recent spike in day-to-day coronavirus infections, but stressed that the number was still in the triple-digits, which is why members of the public should continue practicing social distancing.

The Central Disaster Management Headquarters said Thursday that the central government would decide this weekend whether to extend the strengthened social distancing measures for the Seoul metropolitan area on Sunday midnight as planned, or lift them.

Park Yoo-mi, head of the Seoul Metropolitan Government’s Citizens’ Health Bureau, said in a Thursday press briefing that it was “hard” to decide whether to lift the measures based on a single day’s count, adding the city government wasn’t discussing the idea at all right now.

The Seoul metropolitan area encompassing Seoul, Incheon and Gyeonggi has been under strengthened social distancing measures since last Sunday, on top of Level 2 measures in the state-controlled three-tier social distancing system.

Under so-called Level 2.5 rules, restaurants, bars, bakeries and standalone coffee shops can offer normal services — or allow customers to eat and drink inside the stores — until 9 p.m., after which they can only provide takeout until 5 a.m.

At coffee chains, customers can’t eat or drink inside the stores at any time, and only takeout orders and deliveries are allowed.

The rest of the country is under Level 2.

Even as daily cases have dropped this week, health authorities warned there were still many clusters sporadically popping up all over the nation, like one in Cheongyang County, South Chungcheong, where at least 17 workers at a Hanul kimchi factory turned out positive for the virus on Wednesday and Thursday.

According to Cheongyang officials, the first person to have been diagnosed with the coronavirus was a Nepalese woman in her 20s, who visited a local testing site on Tuesday afternoon after feeling a fever come on, and received her positive results the next day.

Some 130 people who had contact with her were subsequently tested, and 16 received positive results by Thursday morning.

Cheongyang officials said most infected workers were in their 30s to 60s, and either lived in the factory’s dormitory or commuted from nearby towns.

How the Nepalese woman got infected is yet unknown, and health authorities said she mostly appears to have spent time at the factory or dormitory. 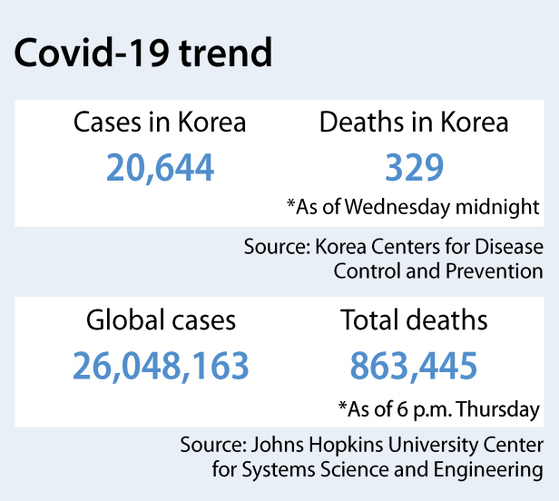 Cheongyang’s county office said some 50 tons of kimchi was produced from Aug. 28 to Wednesday at the Hanul factory, 40 tons of which had already been shipped to Daejeon, Jeju Island and Cheonan, South Chungcheong. They will all be recalled and discarded, officials said.

At Asan Medical Center in Songpa District, southern Seoul, at least six coronavirus patients were detected Wednesday and Thursday, all either hospitalized patients or their guardians. How the virus got into the building is also unknown.

At the National Assembly in Yeouido, western Seoul, many parliamentary activities were canceled Thursday after an official working for the main opposition People Power Party — who isn’t a lawmaker — was diagnosed with the virus that day.

Among 195 infections detected nationwide Wednesday, 188 were local cases, while the rest were imported.

Of the local infections, 69 were in Seoul, 64 in Gyeonggi, 15 in Incheon, seven each in Ulsan and South Chungcheong, six in Gwangju, five in South Jeolla, four each in Busan, Daejeon and Gangwon, two in Daegu and one in North Chungcheong.

Out of seven imported cases, three were from the United States and one each from the Philippines, Uzbekistan, Turkey and Algeria.

Three people died, bringing total deaths to 329, while 173 people recovered, bringing total recoveries to 15,529. The number of patients now in serious or critical condition rose to 154, up by 30 from the previous day.

As of Wednesday at midnight, Korea had counted 20,644 Covid-19 patients in all.