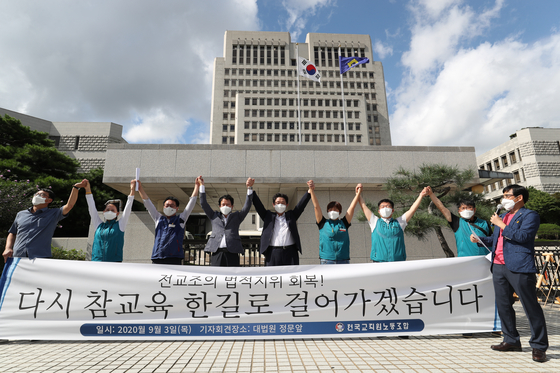 Members of the Korean Teachers and Education Workers Union (KTU) celebrate in front of the Supreme Court in Seocho District, southern Seoul, on Thursday after the top court overturned an appellate court’s ruling and ruled in favor of the progressive teachers’ union. The Supreme Court annulled a decision by the former Park Geun-hye government to outlaw the progressive teachers' union for accepting a handful of fired teachers as its members, opening the way for the union to regain its legal status, and sent the case back to a lower court for retrial. The Supreme Court said denying dismissed teachers the right to join a labor union is unconstitutional and against international standards. It also said depriving the KTU of its legal status just because it had members not employed as teachers was excessive. [NEWS1]

[WHY] Korea decriminalized abortion, but has anything actually changed?