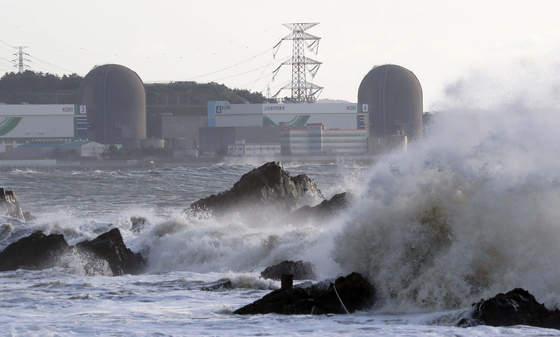 The Kori nuclear power plants in Busan are seen on Wednesday as intense waves brought on by Typhoon Maysak batter nearby shores. Four of the power plants were temporarily shut down due to the storm. [YONHAP]


Korea on Wednesday weathered one of its strongest storms of the year as Typhoon Maysak ripped through the country’s southeast, only to face an even larger threat in Typhoon Haishen next week.

The back-to-back tropical storms follow Typhoon Bavi, which grazed the peninsula last week, as well as one of the longest rainy seasons on record, making this year one of the wettest and windiest the country has ever witnessed.

Before it moved into the East Sea at around 6:30 a.m. Thursday, Maysak left devastation in its wake in Busan, Ulsan, Daegu and North and South Gyeongsang, indirectly killing one person and injuring over a dozen others.

The single fatality was a 67-year-old woman in Busan, who, according to police, was attempting to tape a window in her house in preparation for the storm on Wednesday when she accidentally broke the window and hurt herself with the shattered glass.

Bleeding profusely from her right arm and wrist, she was transferred to a nearby general hospital but died from her wounds early Thursday morning.

Fierce waves brought on by the typhoon overtook a man in his 50s walking in Haeundae District, Busan, who was rescued in a breakwater by emergency personnel with his left leg broken.

Another elderly man in the same district was left briefly unconscious by an outdoor refrigerator that fell over due to a heavy gust, authorities said.

At least 12 other injuries were reported in Busan, largely involving objects broken or knocked over by intense winds that measured up to around 46 meters per second, some of the strongest ever recorded.

Authorities also said a total of 2,412 people had been forced to temporarily evacuate their homes as a result of the storm, with around a thousand of them unable to return as of Thursday morning.

A total of 858 cases of property damage were reported, including over a hundred homes as well as around 5,151 hectares of farmland throughout Gyeongsang. Up to 121,949 households were affected by blackouts of varying lengths as a result of damage to electric lines in various parts of the region.

Operations at four of Korea’s Kori nuclear power plants in Busan were also briefly suspended due to the storm.

According to the Korea Meteorological Administration (KMA) on Thursday, Maysak was making its way through the East Sea on Thursday after dropping off from the coast of Gangwon, before it was due to make a second landfall in North Korea’s South Hamgyong Province with reduced intensity. 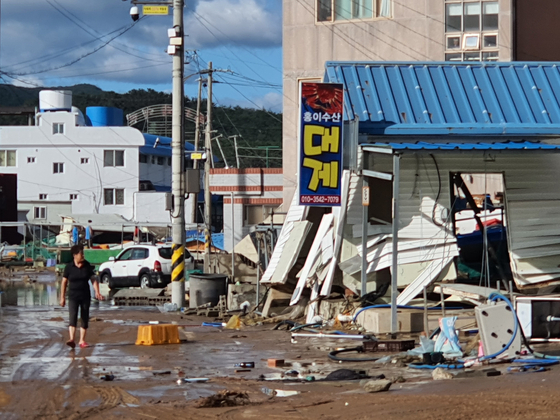 A building stands damaged in Gyeongju, North Gyeongsang, in the aftermath of Typhoon Maysak on Thursday. [YONHAP]


Intense downpours accompanying the storm fell throughout the peninsula, with Jeju being hit by a whopping 1,037 millimeters (40.8 inches) of rain from Wednesday to Thursday, and parts of greater Seoul receiving between 100 to 190 millimeters.

“Typhoon Maysak, unlike Bavi, passed inland, escorted by the formation of rain clouds in its vicinity, so winds were strong and there was a lot of rain,” said Yoon Ki-han, a KMA spokesperson.

The weather agency warned that an even graver threat could be looming as the tenth typhoon of the year — Haishen — was observed to be making its way northwards squarely toward the Korean Peninsula.

Haishen on Thursday was in the Pacific Ocean around 1,000 kilometers (621 miles) northwest of Guam, moving at a speed of around 16 kilometers per hour. The pressure at the center of the storm measured around 970 hetopascals, while the maximum wind speed in its eye was around 35 meters per second (78 miles per hour), said the KMA.

The strongest winds to ever hit Korea were brought by Typhoon Maemi in 2003, which measured speeds of around 51.1 meters per second.

If it continues on its current projected course, Haishen is likely to make landfall next Monday somewhere on the coast of South Gyeongsang, from where it is predicted to move northwards to Daegu and Chuncheon, Gangwon, and into North Korea.

The storm’s maximum wind speed was likely to decrease but still be at a powerful 40 meters per second, enough to knock an adult off his or her feet.