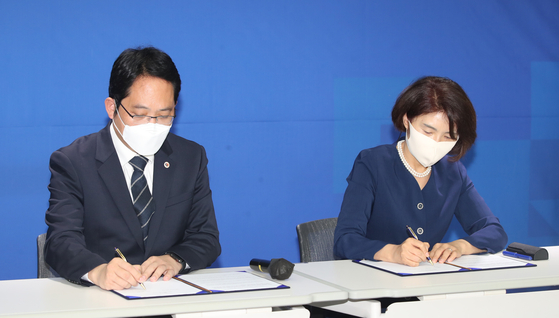 
Doctors said Friday they will end the strike in return for the ruling party’s promise to stop its plan to increase the number of medical students and open a new medical school for public health specialists while Korea battles Covid-19.

Leaders of the Korea Medical Association (KMA) and the ruling Democratic Party (DP) signed an agreement in the morning at the party’s headquarters building in Yeouido, western Seoul. Based on the deal, the KMA said doctors will end their walkouts, which started on Aug. 21.

The two sides agreed to cooperate to resolve problems such as the shortage of medical services in rural areas and outdated medical education and trainee programs. They also agreed to work together to overcome the Covid-19 crisis.

According to the agreement, the two sides agreed that the DP will not make any attempt to push forward plans to increase the number of medical students and open a new medical school for public health doctors until the outbreak subsides.

When the discussion resumes in the future, the ruling party agreed to form a consultative body that includes members of the medical community to listen to doctors’ opinions. The talks will start from square one, instead of modifying the current plans, the DP and the KMA agreed.

The DP also agreed that it will not wield its majority in the legislature and pass any related bills while the talks are taking place.

Doctors started to strike on Aug. 21 after the DP and Ministry of Health and Welfare announced medical reform plans.

The DP and the government announced on July 23 plans to increase the number of medical students by 4,000 in the next 10 years and to open a new medical school to train doctors as public health authorities. The KMA protested the plans, saying the country already has an oversupply of medical professionals.

According to the agreement announced Friday, the DP and the KMA agreed that budgets will be allocated to improve services at public health institutions. The DP also agreed to listen to the demands of the Korean Intern Resident Association (KIRA) to improve working conditions.

The two sides agreed that assistance will be given to doctors and medical institutions to overcome the current coronavirus crisis.

The DP also said it will ask the government to scrap its plan to prosecute 10 doctors who participated in the strike.
Later in the afternoon, the KMA and the Ministry of Health and Welfare signed a similar agreement.