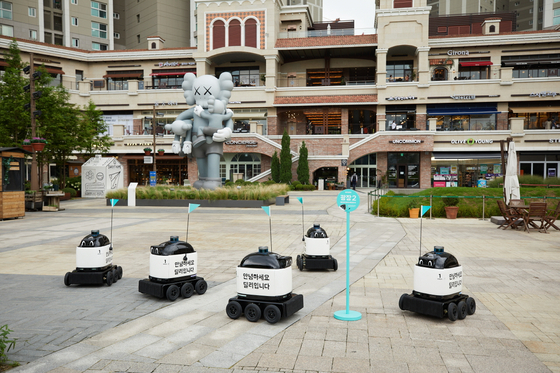 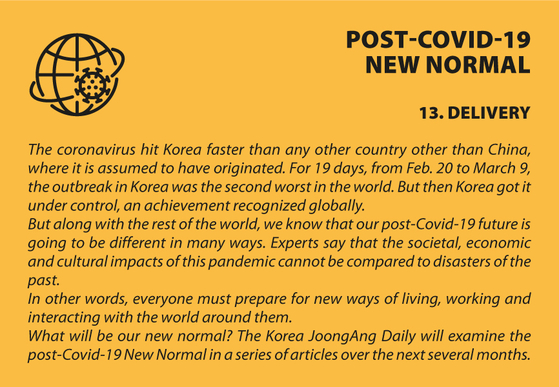 The coronavirus pandemic and the sudden need to separate ourselves from each other has changed how we live, work, communicate, spend our free time and even how we eat and drink. But what if rather than social distancing, we could remove the human element altogether?

At the headquarters of Woowa Brothers, operator of food delivery service Baedal Minjok, on Aug. 7, a robot was making its way around the building, delivering coffees from the cafe to employees.


The 1.08-meter (3.54-foot) tall robot with a face like an excited emoji was carrying drinks on shelves inside its body.

Communicating with the elevator wirelessly through the LTE network, Dilly Tower is able to drive himself around the building without any human help, including navigating different floors. This sets him apart from serving robots, which can make their way around a restaurant or cafe, but aren't ready to head out into the big, wide world just yet.

“I’m getting off at this floor,” Dilly Tower announces so that everybody knows to get out of his way — Dilly Tower can reach speeds of up to 1.2 meters per second.

Arriving at the desk of one of his customers, Dilly Tower needs a numerical code provided when the order was placed to unlock the shelf compartment and remove a drink.


Dilly Tower, currently being trialed, still seems to have some errors. At one point he thought he was in the elevator when he was actually standing next to it, and another time he thought the elevator was too full for him to enter when the doors hadn't even opened yet.

Yet despite the hiccups, the robot clearly fills a major gap in the food and beverage market — full service without the need for human contact. As the demand for contactless services has risen due to Covid-19, Woowa Brothers has pulled the planned commercialization date of Dilly Tower forward from next year to later this year. 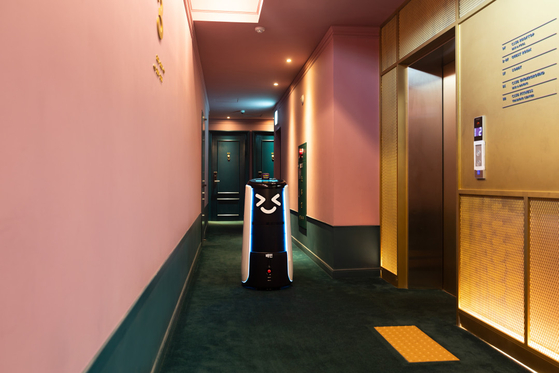 
“The biggest change since Covid-19 is that the robot market has opened up faster than we expected,” said Joseph Kim, head of robot business development at Woowa Brothers. “Our belief in the robot business has grown stronger following the virus outbreak.”

For many years, Woowa Brothers has been working on robots to facilitate delivery. As the need has suddenly shot up following the pandemic, the company is accelerating its research.

In the future planned by Woowa Brothers, robots will be able to pick up an order from a restaurant, drive themselves to the delivery destination while following traffic rules and avoiding obstacles and safely deliver the food.

Woowa Brothers believes commercializing such robots could take some time due to current traffic regulations that bar robots from being operated in public facilities, like roads and parks. These robots are currently tested on private land, including at Konkuk University in eastern Seoul.

While there may be a longer wait for robots that are allowed to hit the road, Woowa Brothers is focusing on commercializing Dilly Tower and increasing the use of Dilly Plate, a serving robot that hit the market in November last year.

“Our goal was to rent out 100 Dilly Plates this year,” said Kim. “But as demand for contactless service has risen, we believe the number could reach 300 within the year.”

As of June, Woowa Brothers has rented out 85 Dilly Plates to 68 restaurants.

“Customers seem to feel safer at our restaurants following the virus because they don’t have to make contact with anyone once they enter,” said Kwon Hyang-jin, the owner of Italian restaurant Merry Go Kitchen in Jamsil, southern Seoul.

At Merry Go Kitchen, customers place their order through the Baedal Minjok, or Baemin, app. Forks and knives are delivered by a robot that pulls up next to the table, and then Dilly Plate turns up with the food.

“The drawback of a serving robot is that restaurants need to secure more space for the robot to pass by, which means there are fewer tables. But at times like this [when social distancing has become important], such space is very helpful.”

It’s been a year since the restaurant started using the robots. A restaurant its size usually needs two to three employees, according to the restaurant owner, but she gets by with just one part-timer, helping her save costs and the stress of managing a workforce.

“Robots can’t offer high-quality service. But considering that the average workload you get out of a person tends to only be about 70 percent, robots don't do any worse,” Kwon added.

It signed a memorandum of understanding with LG Electronics in July to use robots to deliver products inside buildings where a GS25 convenience store is located — a model similar to Dilly Tower. Tests will be conducted at a GS25 store in Parnas Tower in Gangnam, southern Seoul, in October.

Cafes and restaurants are also jumping on the bandwagon.

Restaurant operator CJ Foodville has started using a robotic hand that cooks vegetables and noodles at four of its VIPS buffet restaurants in recent months. It can cook Vietnamese noodles in just a minute.

At Robert Chicken franchise stores, chicken is fried by robots, while coffee franchise Dal.komm Coffee offers b;eat, an unmanned take-out coffee stand. B;eat, which uses a robotic arm to move plastic cups around to pour ice and coffee, is found in retail stores and office buildings.

Kim from Woowa Brothers believes an actual cooking robot will go far beyond just the robotic arms used these days.

“Those robots currently used at restaurants and cafes are industrial robots, meaning they have not been designed specifically for cooking.” He added, ”For a robot to actually cook, it needs to be aware of details, like controlling strength when slicing vegetables and knowing how a sauce should be used for a dish. It should also know when a food is properly cooked.”

Woowa Brothers is currently developing such a robot with a research team affiliated with the University of California, Los Angeles. It thinks it will be three to four years before the robot is ready.

The development of actual cooking robots, along with the prevalent use of robots in general, could help people open restaurants without employing any humans, according to Kim.