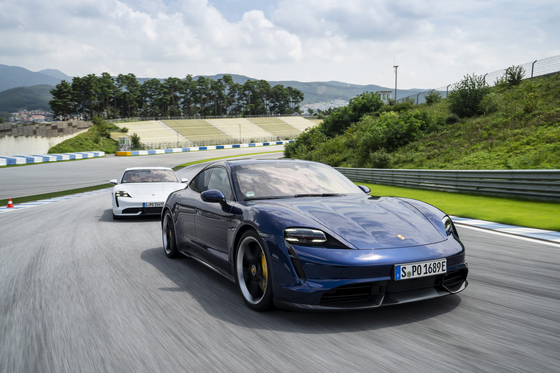 Porsche's Taycan is driven at the 2020 Porsche World Roadshow on Sept. 2 at the AMG Speedway in Yongin, Gyeonggi. [PORSCHE KOREA]


YONGIN, Gyeonggi — Engines growled, while the smell of burnt rubber rose from the AMG Speedway on Wednesday as Porsche’s Taycan, the company’s first-ever pure electric vehicle (EV), was rolled out for the Korean press.

Korea was the Stuttgart-based high-end automaker’s first stop this year on its 2020 Porsche World Roadshow, as its previous stops were cancelled due to the coronavirus. Next will be Taiwan.

Porsche brought all its 26 models, even some not available in Korea, including the 718 Boxster T and 911 GT3 RS for a close look-up and test drives.

The Taycan, the brand’s first full-electric model, was in the lineup, with its Turbo and the Turbo S.

The entry-level Taycan 4S will be brought to Korea in December at the earliest, a slight delay from the initially planned November. The Turbo and Turbo S will available here next year.

Before taking the EV to the circuit, there was an opportunity to test how long it takes Taycan Turbo to reach 100 kilometers per hour (62 miles per hour) from zero. It is rated to hit that speed in 3.2 seconds, but the untrained had trouble breaking five seconds.

With a full press of the accelerator, the amateur can easily get the vehicle to 150 kilometers an hour in no time, head driven back by the g-force and stomach flutter.

No wonder, the instructor, who sat next to the me during the test, warned not to close my eyes and asked if I had blood pressure issues, which I thought at the time was an odd set of warnings.

A test drive of the Taycan Turbo S followed, which allowed me to do two laps of the circuit. As the models are not approved yet in Korea, they cannot be driven on public roads.

At first glance, the car resembles the four-door Panamera sedan. Up close, I got more of a 911 vibe, with the headlamps situated a bit higher on the hood.

The seats were positioned low to give the driver the feeling of a two-door sports car. That was noticeable, as most EVs have high front seats to accommodate the batteries. The curved instrument cluster behind the steering wheel wowed with its combination of minimalism and sophistication. 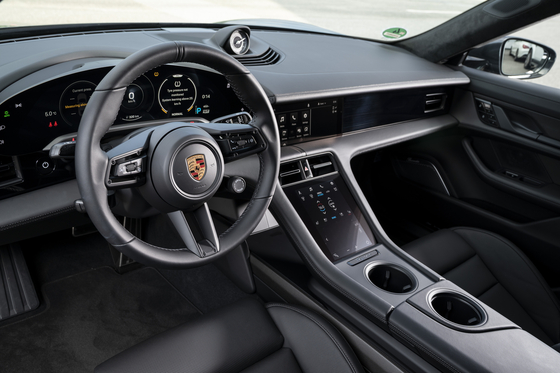 The interior of the Taycan. [PORSCHE KOREA]

With lineage which traces back to the 911, performance is in the DNA. It was powerful yet stable on the track. Having driven internal combustion Porsche sport cars in earlier session, I can say that nothing was lost in terms of handling as the company went fully electric.

Under European standards, the Turbo S has a maximum horsepower of 460 and torque of 850. It takes 2.8 seconds to reach 100 kilometers per hour.

It can go 412 kilometers (256 miles) on a single charge, while the Turbo version can be driven up to 450 kilometers.

To cater to those who admire Porsche for its sports car heritage, the brand added an artificial engine sound. When turned on, the car emits a growl that’s been engineered in. It seem a bit off to me, like something from a spaceship in a sci-fi movie. 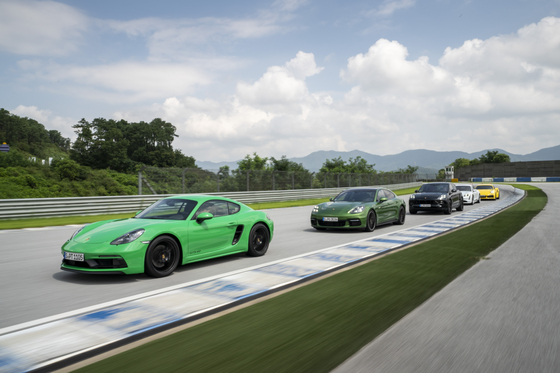 Porsche lineup on the circuit during the Porsche World Roadshow at the AMG Speedway in Yongin, Gyeonggi. [PORSCHE KOREA]