For many, it's a choice between quitting and not working

For many, it's a choice between quitting and not working 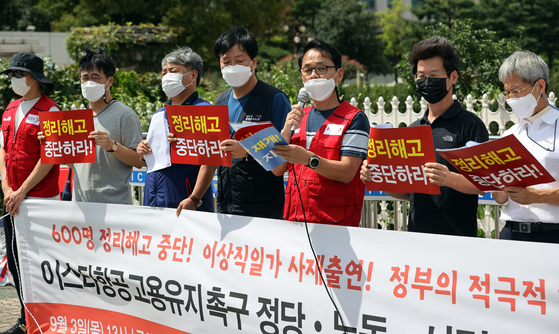 Eastar Jet’s labor union and others Thursday in front of the National Assembly in Yeouido, western Seoul, protesting the release of a restructuring list slated for next Tuesday. The company is under pressure to lay off around 600 people. [YONHAP]


A woman in her 40s who works for Lotte Tour has been given an unenviable set of options. She can take unpaid leave, or she can resign. The company says it can no longer offer paid leave.

If she resigns, the woman can receive unemployment allowances and severance pay, but she is afraid that she will not be able to get a job again because the tourism industry has been hit hard by the pandemic. Even if she chooses the six-month unpaid leave, she thinks that she will ultimately have to resign after a period of time.

“If I choose to go on an unpaid leave, then I will have trouble paying for my child's cram schools, but I am also afraid that I will never be able to find a job again,” she said.

As the pandemic drags on, companies have to make some tough decisions. Many are choosing to reorganize their operations — in some cases, closing down the businesses entirely.

“The trade arm had already been suffering, and the coronavirus pandemic added to the unfavorable conditions,” said a Hanwha spokesperson.

Eastar Jet is in search of a new owner after its takeover by Jeju Air was canceled in July, and the company needs to cut head count by about half to sell the business. Companies that have expressed interest in direct or indirect investments into Eastar Jet have demanded a slimmer organization as a precondition, but only 91 people have applied for voluntary resignations. Eastar Jet is planning on releasing a list of layoffs as early as next Tuesday.

Hotel Lotte has implemented an initiative called the “senior wage system,” which is essentially an early retirement plan. The company states that it is allowing its employees to choose between working at 50 percent wage or early retirement for those 58 and above.

Hotel Lotte has a bumpy road ahead. Lotte Group Chairman Shin Dong-bin has mentioned the possibility of an initial public offering (IPO) of the company several times, but first-half sales dropped 48.2 percent on year. The company also flipped from an operating profit of 97.3 billion won during last year’s first half to an operating loss of 342 billion won in the first half of 2020.

Tension has been building between labor and management.

In the grand scheme of downsizing, the known restructuring plans of businesses of voluntary resignations and unpaid leaves are only a tip of the iceberg — some companies have selected discreet ways to restructure their businesses. An unnamed airline that has been hit hard by the coronavirus pandemic is currently merging and abolishing businesses abroad. The employees at foreign branches are vying for opportunities at the company’s other international offices.

Posco has declared that the company will not push for restructuring. The steelmaker has finalized a wage compromise based on the promise with the labor union that there will be no forced restructuring. The union accepted frozen wages and stable employment.

E-land Retail, operator of New Core outlets and Donga Department stores, has promised not to pressure employees in exchange for voluntary unpaid leave.

“The situation of a dramatic cutdown in manufacturing jobs combined with a dim prospect for employment in the second half is close to a catastrophe,” said Lee Young-min, a human resources professor at Sookmyung Women’s University. “In the long term, there needs to be more investment into training in preparation for the future employment market. These will be more effective than the government’s employment scheme.”