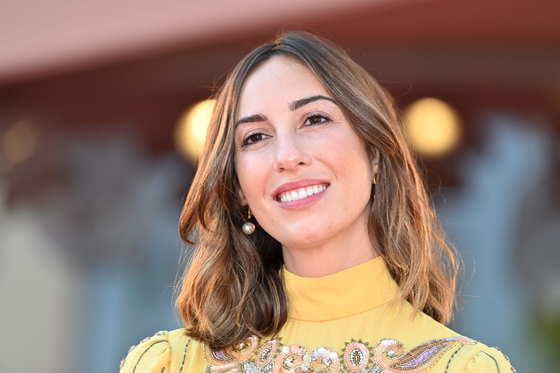 U.S. director Gia Coppola arrives for the screening of the film "Mainstream" presented in the Orizzonti competition on the fourth day of the 77th Venice Film Festival on Sept. 5 at Venice Lido, during the Covid-19 infection, caused by the novel coronavirus. [AFP/YONHAP]


Coronavirus lockdowns have kept most U.S. filmmakers and actors away from the Venice Film Festival, but Gia Coppola and Maya Hawke have brought a bit of today's America to the Lido with "Mainstream," a skewering look at YouTube and influencer culture.

The two descendants of Hollywood royalty (Coppola is a grandchild of Francis Ford and Hawke is the first-born of Uma Thurman and Ethan Hawke) said they have been tested repeatedly for the virus since arriving, as required by festival organizers for participants from outside Europe.

"It feels like a moment where we're like 'O.K., we can follow the rules and we can still celebrate art and filmmaking and protect each other, keep each other safe,'" Hawke said, adding that she appreciated in particular the discipline of festival-goers in adhering to Italy's antivirus precautions that include mask mandates and social distancing norms.

In the United States, "we're still really struggling and having trouble working together. And that's what feels so good about being here — that everyone is working together really, really well and respecting each other," she told The Associated Press on Saturday.

It's Coppola's second feature-length film and second appearance at Venice, after her 2013 debut "Palo Alto," competed in the Horizons section for up-and-coming talent, where "Mainstream" is also making its debut.

The film stars Hawke as Frankie, a Los Angeles bartender whose YouTube video of a charismatic nobody, played by Andrew Garfield, becomes an internet sensation. The film explores the underbelly of influencer culture and the constant need to get attention from strangers on social media.

"It asks the question about whether or not it's possible to make art while you're still trying to get attention and look for likes," said Hawke, currently getting her own attention for her role on the Netflix series "Stranger Things." Hawke said her instinctive answer is no, but allows that Garfield's final performance in which his persona unravels online certainly counts as art.

Coppola said she was inspired to make the film by "A Face in the Crowd," the 1957 film starring Andy Griffith about a drifter who becomes a radio and television sensation. "Mainstream" is essentially a redux and variation.

"The morals for me are that all that glitters is not gold, and community and connection is really important," Coppola said.

The festival, the first major in-person cinema showcase after Covid-19 locked down the film industry, wraps up on Sept. 12. In addition to the Horizons competition, 18 films are competing for the Golden Lion in the main selection.