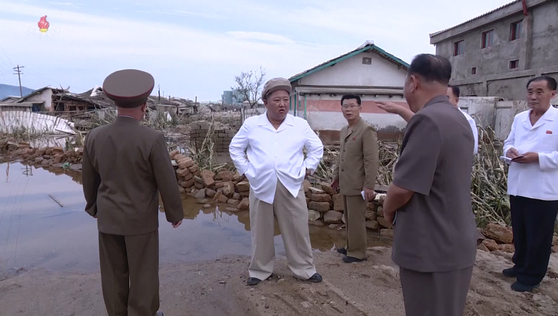 North Korean leader Kim Jong-un, center, inspects an area damaged by Typhoon Maysak in the country's eastern South Hamgyong Province, in a photo published by the Rodong Sinmun, the official newspaper of the ruling party, on Sunday. [YONHAP]

The enlarged executive policy meeting was held on Saturday to gauge the damage from last week's Typhoon Maysak, which hit its eastern areas hard. More than 1,000 houses were destroyed, according to the Korean Central News Agency (KCNA).

The meeting "had an in-depth discussion about the issue of the recovery from damage in the typhoon-hit areas of the two provinces and studied and decided on the detailed measures such as organization of building force to be urgently dispatched to the areas, designs and material transport," KCNA said.

Kim also called for party members, especially those in the capital, to "take the lead in aiding the provinces when the country undergoes difficulties and hardships would make a great contribution to the strengthening of the single-minded unity of our society," the KCNA said.

"Learning about the growth of the crops damaged by typhoon, he called for taking positive agricultural and technological measures for minimizing the reduction of the yield," it added.

During the meeting, the chairman of the ruling party's South Hamgyong provincial committee was dismissed over an apparent failure in coping with the typhoon, and a replacement was appointed, the KCNA said.

The exact location of the meeting was not disclosed by state media, but news clips from the Korean Central Television Broadcasting Station suggest the meeting took place in one of Kim's trains, given the window and seating arrangements.

In an open letter sent to party members in Pyongyang, Kim said that about 12,000 elite party members of the capital city will be sent to the two provinces each to help with recovery efforts, according to the KCNA.

Kim's visit to the typhoon-hit areas is seen as aimed at highlighting his image as a leader caring for the lives of his people as they have been reeling from back-to-back natural disasters.

Typhoon Maysak, the ninth tropical storm of the season, hit North Korea as the country was still reeling from damage caused by another typhoon and heavy downpours, which affected its major rice-producing areas in the southwestern province.

On Saturday, the North's main newspaper Rodong Sinmun reported that the party decided to punish officials in the east coast city of Wonsan and Kangwon Province for failing to evacuate homes and take other preventive measures in advance of the typhoon, leading to the deaths of dozens of people.

Faced with global sanctions and the fallout from its protracted antivirus efforts, North Korea is concerned that recent back-to-back natural disasters affecting the farming sector could aggravate its chronic food shortage.

Kim and high-ranking officials recently increased their field trips to affected areas, urging efforts to speed up recovery and minimize a reduction in harvest.

Recently, Kim visited a typhoon-hit area last week and urged "an all-out campaign" of completing the recovery so that the country can mark the party's founding anniversary next month.