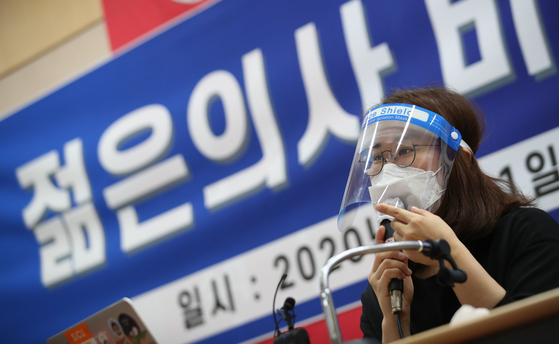 Park Ji-hyun, interim leader of the Korean Intern Resident Association (KIRA) leading the strike, speaks at a press conference last week criticizing the government's reform plans. Park and KIRA announced Sunday the group was acquiescing to an agreement between the government and the Korean Medical Association to suspend the strike amid the Covid-19 outbreak. [YONHAP]

To the last minute, hardliners within the Korean Intern Resident Association (KIRA) were resisting an agreement reached between the Korean Medical Association (KMA) and the ruling Democratic Party Friday to end a coordinated walkout by trainee doctors carried out since Aug. 21.


Amid a surge in Covid-19 cases in the country, the KMA agreed to end the strike in exchange for the government backing off from its plans to increase the number of medical students and open a new medical school for public health doctors until the outbreak subsides.

The deal, however, immediately received intense backlash from many younger doctors and trainees who claimed KMA President Choi Dae-zip had no right to reach an agreement to end the strike on their behalf.

Within KIRA, members were split among those who supported the decision to return to work while carrying out individual protests against government plans and those who argued the strike should carry on indefinitely until the government fully retracts its plans.

After two days of internal debate, KIRA’s leadership Sunday afternoon announced it was supporting the agreement to suspend the strike, while protesting its exclusion from the talks between the government and KMA.

“With the KMA and government’s snap agreement, the justification for [the strike] has faded away,” said Park Ji-hyun, KIRA’s interim president, admitting the strike could not continue in its current form.

“We are not satisfied, but we have shown that young doctors have the ability to unite to discuss medical issues and solve them.”


With the strike effectively over for now, trainee doctors were likely to return to work by Monday morning, according to medical sources.


But fierce resistance from several elements within KIRA suggested many would not obey the organization’s leaders and continue the strike on their own. Some members even attempted a vote of no confidence against Park, which failed. 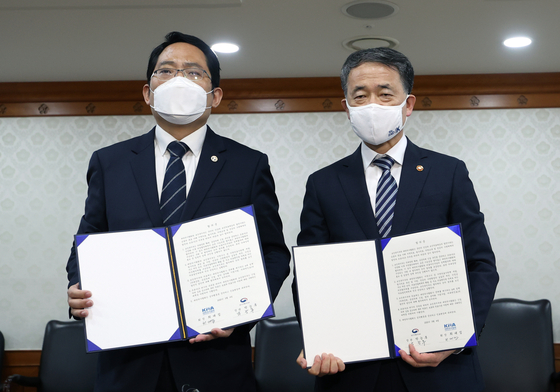 Korean Minister of Health and Welfare Park Neung-hoo, right, and Korean Medical Association President Choi Dae-zip hold up a signed agreement. The two sides agreed to end the strikes in exchange for the government suspending its plans. [YONHAP]


The dispute even triggered a physical scuffle at a KIRA meeting on Saturday, when a trainee doctor in his 20s allegedly assaulted a medical professor who spoke at the meeting despite not being invited.

One particularly contentious issue was the national medical license exam, which had been boycotted by medical students. The government last week postponed the tests, set for September and October, by one week to encourage a compromise, but hardliners insist the boycott of the tests should continue even if the strike ends.

Since the strike began on Aug. 21, major hospitals nationwide have been operating at a reduced capacity, leading to overloading at emergency centers and surgery postponements.


Seoul National University Hospital also released the results of a poll it conducted over the weekend showing that 87.4 percent of its doctors and medical professors agreed with younger doctors favoring a return to work in accordance with the agreement with the government.