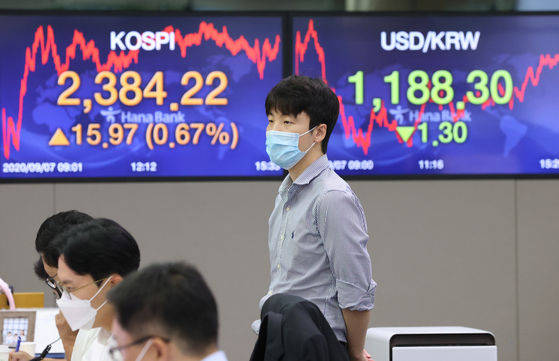 A screen shows the closing figure for the Kospi in a trading room at Hana Bank in Jung District, central Seoul, on Monday. [YONHAP]


Shares rebounded Monday, led by Samsung Electronics and some bio stocks. The won rose against the dollar.

The Kospi rebounded from a 1.15 percent plunge the previous session, despite growing stock price valuation concerns.

The country added 119 Covid-19 cases Monday, marking a sharp fall from 167 additional cases reported Sunday and the fewest in nearly a month.

On Friday, Korean authorities extended the enhanced social distancing scheme by a week to Sept. 13.

Samsung Electronics added 1.62 percent to 56,500 won, following news that the company will supply network equipment to Verizon in a 7.89 trillion won deal.

The local currency closed at 1,188.3 won per dollar, down 1.3 won from the previous session's close.