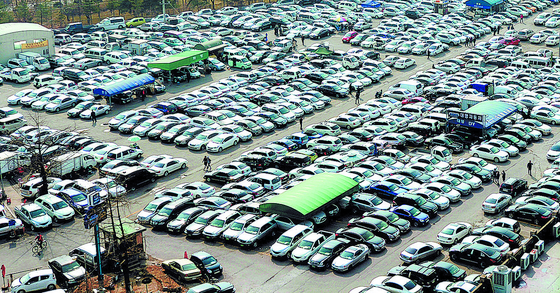 
A man in his 50s recently visited a used-car dealership in Bucheon, Gyeonggi, after seeing a two-year-old Hyundai Santa Fe advertised online for 9.5 million won ($8,000). Although the cheap price seemed suspicious, the dealership’s website looked legitimate.

When the man arrived at the dealership, employees immediately offered him other cars for even more competitive prices. Despite the obvious red flags, the price was so good that the man ended up signing a contract.

It wasn't until he was leaving in his new car and the staff admitted that he ought to have it inspected for faults within the next two months that the man realized how badly he'd been had.

“There were signs at every stage that this was a fraud, but as a consumer without perfect knowledge, I was helpless and became a victim,” he said.


Reports of fraudulent sales have spurred a debate over whether the proposed entry of conglomerates to the used-car market will be beneficial, or if the protection currently in place for small- and medium-sized businesses is still needed.

Last November, the Korea Commission for Corporate Partnership contested the designation of used-car dealerships as small- and medium-sized businesses that need protection from conglomerates. The commission delegated the decision to the Ministry of SMEs and Startups, but the verdict has been postponed due to the coronavirus pandemic.

Existing used-car dealerships oppose the entry of major automobile conglomerates, saying that their businesses will be undermined by the arrival of much bigger players. Automobile manufacturers, however, say that conglomerates’ entry into the market is necessary to restore transparency and convenience for consumers, like that man in Bucheon.

The bulk of consumer complaints toward used-car dealerships are due to the lack of transparency demonstrated through fraudulent deals and scams.

According to a survey on consumers’ perception of the used-car industry last November requested by the Korea Economic Research Institute (KERI) and conducted by Mono Research, 76.4 percent of respondents view the market for used cars as dishonest and outdated.

The majority of people with such views gave a distrust in automobile quality and the occurrence of scams as major reasons. A recent investigation by the Gyeonggi Provincial Government into 31 online used-car dealerships showed that 95 percent of registered cars were fraudulent sales.

The used-car dealers say fraud is not that widespread, arguing that such sales are committed by just a few firms associated with criminal groups, not by any members of the official dealership association.

“There is no guarantee that crimes like fraudulent sales will stop when conglomerates enter the used-car market,” said Lee Kang-hee, a department head at the Korea Used Car Dealers Association.

Lee said the scams should be handled by law enforcement and monitored by local government, and they do not suggest systemic flaws in the industry.

Industry insiders also have a lot to say about the criticism regarding a lack of transparency.

“The background information on each car is accessible on the ‘Car 365’ website run by the Ministry of Land, Infrastructure and Transport. The issue is a lack of awareness, not a lack of transparency,” said Ji Hye-sung, the secretary general of the Korea Federation of Used Car Dealers Association. 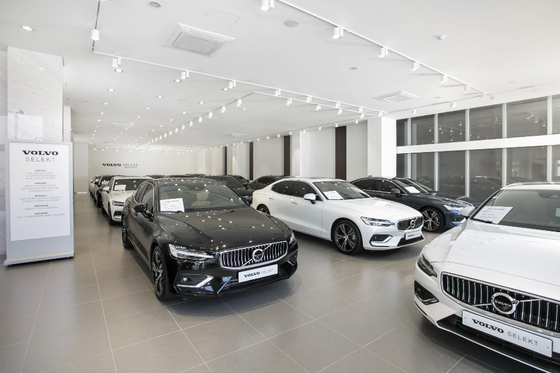 A number of imported car brands like Volvo are currently in the used-car dealership business. [VOLVO CARS KOREA]


Most of the background information of registered used cars is available for free, except for accident history — the Korea Insurance Department Institute charges for access to that information.

Questions have also been raised over whether dealerships deserve to be protected as small businesses considering their high turnovers. In response, those in the business say their sales are high due to the expensive price tags of cars, but their revenue still suits the requirements of a small business.

Whether the used-car industry deserves legal protection or not, it is undeniable that the local market is outdated. In the United States, there were 40.8 million used-car sales last year, 2.4 times the number of new-car sales. In Germany, the largest market in Europe, the size of the used-car market was twice that of the market for new cars.

In Korea, where shiny new cars are still seen as a status symbol for many people, only 2.24 million used cars were sold last year, just 1.2 times new-car sales.

The diversity in the markets in the United States and Germany contribute to the large number of used cars sold.

Korea only has a few types of used-car dealerships, but in the United States, the industry functions in multiple forms: There are car manufacturers that sell both new and used cars, independent dealers that only sell used cars, online dealers, wholesale intermediary firms and auctions for used cars. There are also derived businesses, such as information service firms and comprehensive solution firms that manage the inventory as well as customer service.

There are a number of firms that have attempted to sell authorized used cars in Korea, but they have not gone beyond uploading the information online, which is not enough to restore consumers’ trust in the market.

Major auto manufacturers like Hyundai Motor and Kia Motors say that their entry into the used-car market will serve as a benefit for consumers. Their belief is that by directly managing used cars, they can maintain the quality of the vehicles.

In the KERI survey, 51.6 percent of respondents agreed with conglomerates’ move into the market, while 23.1 percent opposed the idea.

“When an Avante breaks down, the consumers complain about Hyundai Motor, not the dealership that sold them the used car,” said an employee at Hyundai Motor. “The entry into the market is not for increasing sales, but for managing the brand’s reputation.”

With the advance of the electric vehicle (EV) era, automakers say that it is even more important that they directly manage their cars.

The EV maintenance network is weak compared to gasoline and diesel cars, and automakers are concerned that consumers will not be able to trust the EVs available on the market. Some point out that the local system discriminates against domestic brands, as imported car companies are allowed to run their own used-car authorization business.

Besides the concerns about the impact of the automobile makers’ foray into the used-car business, questions remain regarding how the assessment of used cars will be systemized.

There are also suspicions that the car manufacturers are eyeing the financial market for monthly installment payments. Many imported car firms are reaping huge profits from installment payments and leases of used cars. Hyundai Capital also runs a used-car business.

Industry experts say that there needs to be a solution that both improves the consumer experience and sustains the used-car business.

“Measures, such as a limit on the shares of major firms, must be established before allowing the entry of car makers into the used-car industry,” said Lee Ho-geun, an automotive professor at Daeduk University.

“Price increases are inevitable if companies like Hyundai and Kia enter the market. When that happens, the automakers will not be able to dominate the market, but the market will be divided. It can be an opportunity for market diversification. Setting the amount of shares and keeping the rate for 10 years could be one solution.”

Kia plans to take on the used car market