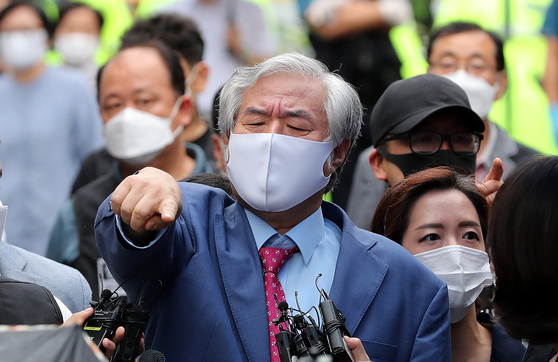 The Seoul Central District Court formally accepted the prosecution’s request to detain the right-wing leader of the Sarang Jeil Church in Seongbuk District, central Seoul, 140 days after he had been freed from the Seoul Detention Center in Uiwang, Gyeonggi.

The court’s decision came five days after the pastor was discharged from the hospital for coronavirus treatment. He was diagnosed with the virus on Aug. 17, less than a week after an infection was detected at his church, which immediately led to Korea's second-largest coronavirus hot spot.

By Monday at noon, the Sarang Jeil Church cluster had reached 1,163 cases, according to data compiled by the Korea Centers for Disease Control and Prevention (KCDC).

Jun, a scathing critic of President Moon Jae-in and his liberal government, is best known for his anti-Moon rallies in Gwanghwamun, central Seoul. He was placed under pretrial detention last February on charges of breaching election laws and slander against Moon ahead of the April general elections.

Seoul election authorities accused the pastor of allegedly calling on protestors during his street demonstrations to vote for conservative parties before the beginning of the official election period — the time during which it is legal to publicly electioneer. Jun was also accused of defaming Moon during the protests by calling him a North Korean “spy” and claiming he was trying to “communize” the country.

He was to face trial during detention.

Jun, however, was released on bail in April after complaining about his deteriorating health and paying 50 million won ($42,000) to the court. One of the conditions of his bail was that he not participate in any rally “connected” to his allegations.

Prosecutors saw that Jun disobeyed this rule on Aug. 15 when he joined the anti-Moon rally in Gwanghwamun, even as a cluster was growing inside his church community and health officials warned congregants not to attend the demonstration and stay home.

At one point of the rally, Jun stepped up to the microphone and accused the Moon administration of sabotaging his church.

Prosecutors asked the Seoul Central District Court on Aug. 16 to revoke Jun’s bail, but the court waited until he recovered from the coronavirus.

As Jun left his home Monday at around 3:35 p.m., flanked by police officers on his way to be detained, the pastor denounced Moon for running a “totalitarian country,” adding that the media were falsely reporting his church hampered government efforts to curb the spread of the disease.

The Seoul Central District Prosecutors’ Office later said in a statement that Jun was officially jailed at the Seoul Detention Center at 4:30 p.m.