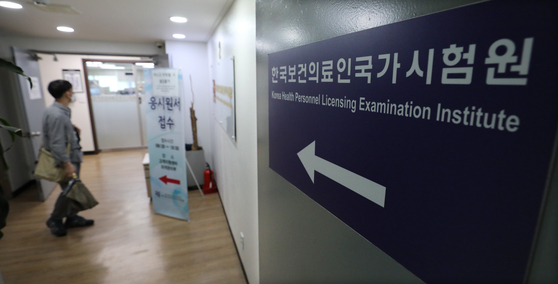 A mans stares at the registration sign at the Korea Health Personnel Licensing Examination Institute in Gwangjin District, eastern Seoul, a day before the 85th Korean Medical License Examination kicks off. The Health Ministry said Monday that the medical exam, already postponed once, will be carried out as scheduled despite only 14 percent out of 3,172 medical students having applied for it amid a boycott over increasing medical school admissions. [NEWS1]

The Korean Intern Resident Association (KIRA) announced Monday afternoon that trainees will suspend their indefinite nationwide strike since Aug. 21 and return to their posts on Tuesday at 7 a.m. — for the time being.

However, KIRA demanded the government come up with measures to let medical students who boycotted their medical licensing exam, already postponed once, to apply for the test again.

After the government and Korean Medical Association (KMA) came to a truce last Friday, the trainee doctors were initially expected to return to their jobs Monday morning.

But late Sunday, KIRA issued a statement saying the trainee doctors would not return to work Monday after its members said their views were not sufficiently reflected in the truce last Friday.

The KMA reached a deal with the ruling Democratic Party and later the Health Ministry to suspend government plans introduced in July to increase medical school admissions by 4,000 students for the next decade starting in 2022 and to build a public medical school until the Covid-19 crisis subsides.

A young doctors’ emergency committee representing interns, residents and fellows on Thursday had generally agreed to the KMA deal the previous day.

But the deal, signed by KMA President Choi Dae-zip and Health Minister Park Neung-hoo, was criticized from some trainee doctors who claimed that the KMA had no right to reach an agreement to end the strike on their behalf.

Park Ji-hyun, the president of KIRA, who has served as head of the young doctors’ committee, said Sunday afternoon after holding a closed-door meeting that the trainees planned to end their strike without announcing the exact date.

KIRA announced late Sunday that trainees were not going back to work Monday morning.

The young doctors’ emergency committee held another meeting Monday afternoon on ending the strike, which has put a strain on emergency rooms and intensive care units and forced postponements of nonessential surgeries in major hospitals.

Park announced Monday afternoon that starting Tuesday, the trainee doctors will lower their collective action by one level, in effect halting their strike.

KIRA established a three-level road map that details their actions protesting the reform measures. Level 1, the lowest “close monitoring” tier, enables trainees to return to their jobs while still maintaining emergency committees at each hospital. Level 2, or “code blue,” calls for a partial walkout while maintaining only essential personnel to manage the Covid-19 situation. Level 3, “black out,” calls for a total strike although they can help with coronavirus treatment on a voluntary basis.

KIRA also warned that if no action was taken to support the medical students within two weeks, it could raise the warning level.

Medical students boycotting the Korean Medical License Examination missed the chance to sign up for the test again by midnight Sunday though the first round of the postponed exam was scheduled for Tuesday.

After nearly 90 percent of people signed up for the 2021 Korean Medical License Examination set for September and October canceled their applications en masse, with the first round set to kick off on Sept. 1, the government announced that it would be pushing back the exam by one week in a sign of compromise.

The Health Ministry said Monday that the state exam will be carried out as scheduled.

The organizers of the exam, the Korea Health Personnel Licensing Examination Institute, said that just 14 percent, or 446 applicants out of a total of 3,172 medical students, are taking it, with just 10 people expected to take it Tuesday.

“Our struggle has not ended, and we will maintain an emergency committee to hold a general strike again if compelled,” stressed Park.

However, Park and all other leaders of the emergency committee stepped down from their posts Monday afternoon amid continued backlash from young doctors, raising the question of whether the trainees will be able to return to work as planned. Some hospitals may individually hold votes overnight on whether trainees will return to their jobs.


Some fellows returned to their jobs Monday amid concerns over the prolonged disruption in hospital services.

Likewise, professors at Seoul National University Hospital urged their juniors to trust them and return to work in a statement, saying, “Now is the time to return to patients’ sides to carry out the fundamental responsibilities of doctors and regain the peoples' trust in order and enable them to listen to our voices better.”