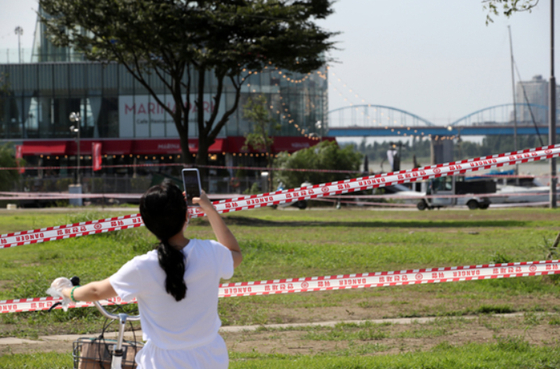 The Banpo Han River Park's picnic area in southern Seoul is sealed off Tuesday afternoon as part of social distancing measures. The Seoul city government announced earlier in the day that heavily-visited areas of the Han River Park will be closed to the public starting 2 p.m., and that riverside convenience stores and cafes will reduce their hours. [NEWS1]


The Seoul Metropolitan Government started restricting entry to popular parts of the Han River Park Tuesday afternoon to limit transmission of the coronavirus.

The city government announced that starting 2 p.m., entry to three popular river park areas — the event plaza at Yeouido Hangang Park, the Ttukseom Culture Complex J-Bug and the Banpo Hangang Park's picnic areas — will be blocked to the public.

Some 28 convenience stores and seven cafes in the Han River Park area will be limiting operations and close after 9 p.m. as the central government continues its so-called Level 2.5 social distancing measures in the greater Seoul area, which includes Incheon and surrounding Gyeonggi, implemented since Aug. 30 and set to run until at least Sunday.

Access to 43 parking lots at riverside parks will be restricted from 9 p.m. to 2 a.m.

The latest measures come amid complaints of people crowding the Han River Park, 11 public parks on the banks of the Han River running through Seoul, after restaurants and bars were forced to close after 9 p.m.

The city government will encourage people who go to the parks that remain open to keep apart by 2 meters (6 feet), always wear masks and limit eating and drinking after 9 p.m.

Shin Yong-mok, a Seoul city official overseeing the Han River Project Headquarters, said that nearly half of all visitors to the riverside area went to the Yeouido, Ttukseom and Banpo parks. He added that visitors to the Han River Park recently increased between 33 to 40 percent compared to the same period last year, and especially noted a spike last weekend.

In June, the Seoul government decided not to operate its seven riverside pools and water parks this summer because of the coronavirus. 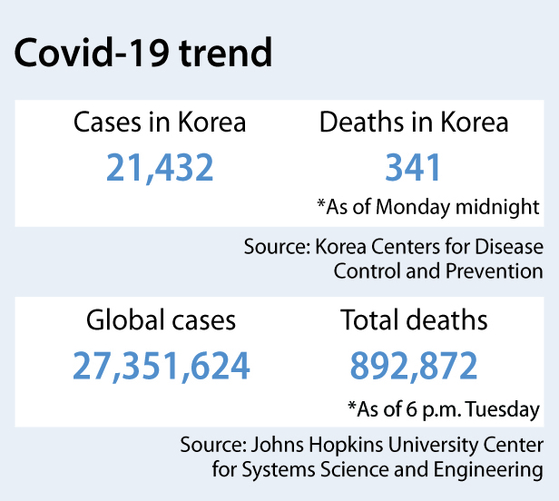 Korea for the sixth day kept new cases in the 100s Tuesday, adding 136 more Covid-19 patients, of which 120 were local infections and 16 imported. This was slightly up from 119 the previous day, the lowest number in 24 days, but markedly down from a five-month high of 441 new patients on Aug. 27.

Total cases reached 21,432 as of Monday midnight, according to the Korea Centers for Disease Control and Prevention (KCDC), while there were five more deaths, raising the total death toll to 341.

Of the new cases, 67 were from Seoul, 29 from Gyeonggi, two from Incheon and 12 from Gwangju.

Four new deaths were patients in their 70s to 90s from Seoul. Three deaths occurred around a week after the patients were diagnosed with Covid-19, and one patient didn’t have any pre-existing conditions. There are 151 patients in critical condition as of Tuesday.

One cluster, around a telemarketing call center in Gangdong District, eastern Seoul, has produced at least 22 patients since its first case was confirmed last Friday. The city government tested various samples to check the transmission route at the call center, and confirmed Tuesday that the Covid-19 virus was found on doorknobs and air conditioners in the office.

The city government urged call centers, offices and schools that are air conditioned to open windows and air out rooms at least once every two hours.

The KCDC said that infections linked to the Sarang Jeil Church in Seongbuk District reached 1,167 as of Tuesday, and 539 patients were linked to the Gwanghwamun antigovernment rally on Aug. 15.

A kindergarten in Gimpo, Gyeonggi, has a total of eight cases so far as the virus spread to a teacher, student and family members.

The government is also reviewing not exempting tolls on freeways to restrict travel during the Chuseok holiday, which falls at the end of this month.

Since 2017, the government has exempted tolls during such national holidays.

Prime Minister Chung Sye-kyun on Sunday encouraged people to “minimize movement and stay home if possible” over the holiday.

The Cabinet approved plans to elevate the KCDC, created in 2004, as an independent administration starting Saturday, a move aimed at strengthening the country’s response to infectious diseases and giving the agency more authority by separating it from the Ministry of Health and Welfare.

President Moon Jae-in tapped Jung Eun-kyeong, current director of the KCDC, which has been overseeing the country’s coronavirus response, as the first head of the new Korea Disease Control and Prevention Agency (KDCA), according to the Blue House Tuesday.

While presiding over a Cabinet meeting, Moon said, “The KCDC through its Covid-19 response has carried out a central role in leading the K-quarantine measures, which have been a model to the world.”

He went onto urge the KDCA to “strengthen the response to infectious diseases to another level” and to help “pass this critical moment with a resurgence in coronavirus cases and to stably and surely contain the coronavirus at an early date.”

The head of the new KDCA will be a vice minister-level official with autonomy to manage the budget and hire experts, while the total staff will be increased 42 percent to 1,476 personnel.

Moon also promoted Kang Do-tae, a deputy minister for planning and coordination at the Health Ministry, to the newly-created post of second vice health minister, said Kang Min-seok, the Blue House spokesman, in a statement.

The Health Ministry is expanding its leadership to two vice ministers from the current one. The first vice minister will oversee welfare, planning and coordination matters, while the second will oversee public health affairs. 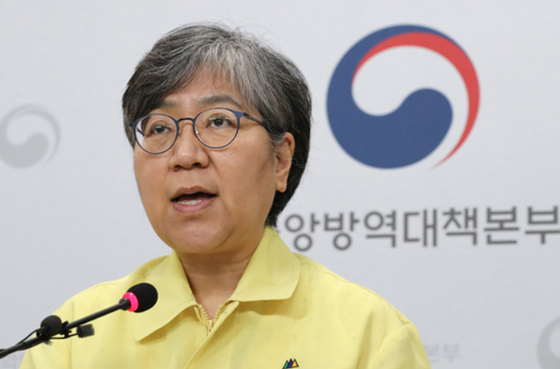