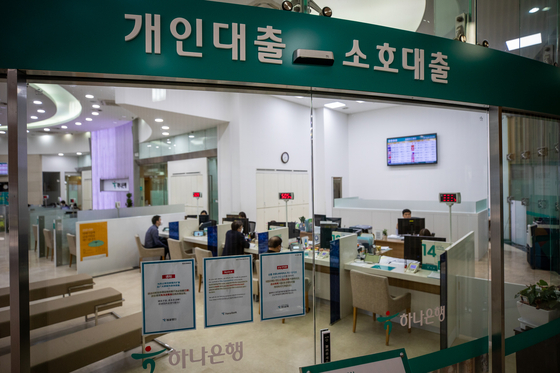 Customers consult with bank clerks on borrowing loans at a Hana Bank in Seoul. [NEWS1]


Loans to households increased by a record amount in August, led by borrowings for investments in property and shares.

According to Bank of Korea and Financial Services Commission (FSC) data released Wednesday, loans taken out by households from commercial banks increased by 11.8 trillion won ($9.9 billion) in August, bringing the total outstanding to 948.2 trillion.

It is the biggest monthly increase since the institutions began compiling related statistics in 2004.

When all financial institutions — which would also include savings banks and credit card companies — are included, new borrowings by households last month reached 14.0 trillion won. 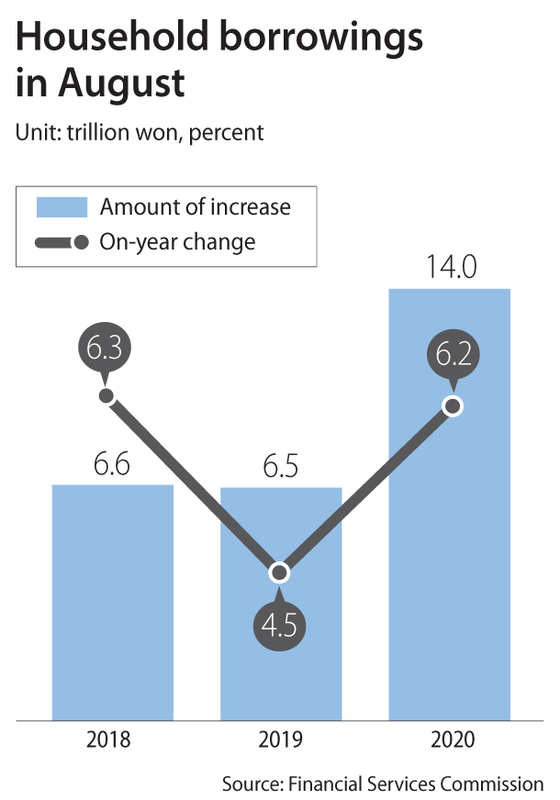 By loan type, 6.1 trillion won was borrowed for housing, a nearly 33 percent year-on-year jump. Of that, loans for jeonse, or long-term rent deposits, totaled 3.4 trillion won.

"There were more jeonse trades last month," said Yoon Ok-ja, an official from the central bank.

Unsecured loans hit 5.7 trillion won in the month of August. This was largely due to low interest rates and a recent increase in money borrowed by individual investors buying into the initial public offerings, such as the IPO of Kakao Games, the FSC said.

The commission also suspected some of the unsecured lending went toward property purchases, as mortgage lending has been held back by government policy, adding it will inspect banks to determine whether unsecured loans were issued according to the rules.

"The FSC will take a closer look to see if the recent increase in household loans is a temporary phenomenon or an actual trend in the economy. After thorough inspection, we will come up with an action plan to manage the increasing debt," said the FSC.

In August, corporate lending declined. A total of 5.9 trillion won was borrowed by companies last month, compared to 8.4 trillion won the month before.

"Big companies are in less urgent need for liquidity, but the demand for loans is steadily increasing among smaller businesses and the self employed. Financial support from public institutions also contributed to the increase," explained the central bank.