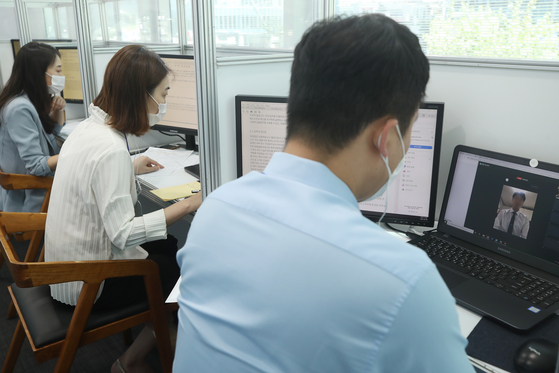 
The number of people with jobs shrunk for the sixth consecutive month, with 274,000 jobs lost in August compared to a year earlier.

Covid-19 was only one factor. Korea's longest rainy season on record was another.

September figures could be worse as the effect of stricter social distancing regulations due to the resurgence of Covid-19 is felt, along with two typhoons that hit the Peninsula back-to-back.

According to Statistics Korea on Wednesday, 27.08 million people had jobs in August, a decline of 274,000 compared to a year ago.

It has been Korea's longest stretch of job losses in more than a decade.

“As in July, August was affected by Covid-19 and the long heavy rainy season,” said Chung Dong-wook, Statistics Korea’s director of employment statistics.

The wholesales and retail sector saw 176,000 lost jobs, while lodgings and restaurants lost 169,000. The education industry saw the number of people employed shrink 89,000.

Agriculture and fisheries saw 3,000 fewer people employed, largely due to the heavy rains.

The logistics and storage industry saw 56,000 more hires, largely thanks to the social distancing regulations that boosted online shopping and deliveries.

By age group, the only bracket that saw positive growth were people 60 years old or older.

The latest statistics showed that the impact of the virus and rainy season was hardest on those with less job security.

The number of employees hired on contracts when compared to a year ago was 318,000 fewer, while jobs for day-workers shrunk by 78,000.

However, in the category of salaried workers, there was an increase of 282,000.

Self-employed businesses were also hit hard by the ongoing pandemic.

“The job indexes that were reported today were the results of the job situation before social distancing measures were raised in the greater Seoul area,” Hong said on Facebook.

“My heart is already heavy with the thought of the additional impact [of the toughened measures],” Hong said. “We will submit a fourth supplementary budget within this week at the National Assembly that is strongly centered on the vulnerable class and those that are affected the most.”