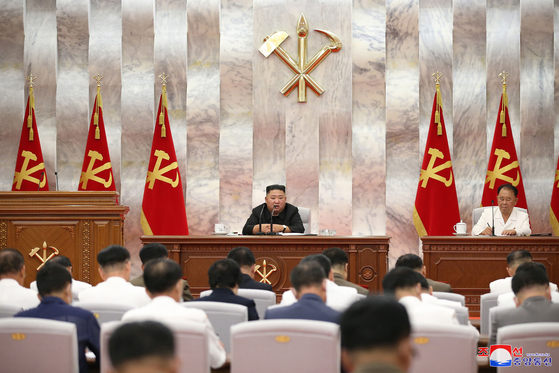 According to the Rodong Sinmun, the official newspaper of the North’s ruling Workers’ Party, Kim presided over an enlarged Central Military Commission (CMC) meeting on Tuesday to address the devastation wrought by the storm on the Komdok area in South Hamgyong Province, which houses one of North Korea’s most important natural mineral mines.

North Korea is known to have one of the largest rare-earth mineral reserves in the world, and the Komdok mine is one of the country’s leading producers of lead and zinc. Nearby Taehung and Ryongyang mines, located in the Buktaechon Valley, are key producers of magnesium.

The sprawling mining complexes in the area were heavily damaged on Sept. 3 as a result of flooding and landslides due to Typhoon Maysak, the Rodong Sinmun reported.

Around 2,000 households — most of them miners and their families — were left homeless, while the storm also destroyed 59 bridges and almost 60 kilometers (37 miles) of roads, the report said. In addition, around 3,500 meters of railway roadbeds and 1,130 meters of railways were destroyed, “leading to a state of emergency of total paralysis of transport system,” the report said.

Kim, the report continued, stressed the storm's destruction has left the regime with no choice but to “change the direction of our struggle” and “comprehensively” reconsider scheduled projects for the rest of the year.

He then ordered that “state emergency measures” be taken to ensure homes and the road network in the area are restored by Thursday — and that “all damages are undone 100 percent by year-end.”

Such an order was a tall one for the cash-strapped regime, which is facing its biggest economic crisis since the mid-1990s amid Covid-19 and serial natural disasters like typhoons and the one of the longest rainy seasons on record this summer.

According to a 2019 report on the Taehung mine by the U.S.-based Center for Strategic International Studies (CSIS), the area had not yet even recovered fully from the damage caused by a 2012 storm, Typhoon Bolaven, as late as 2018.

Kim’s admission that changes to economic plans were inevitable is the second time in only five months the regime has been forced to revise its economic agenda for the year, following a similar decision due to the Covid-19 pandemic in April.

What those changes will entail is unclear. One possibility is that the regime may be scrapping or postponing its plans to complete the Pyongyang General Hospital by October, when the Workers’ Party celebrates its 75th anniversary.

To underscore the public's receptiveness to Kim’s call to action, state media this week reported that 300,000 party members in Pyongyang volunteered and left for North and South Hamgyong Provinces to assist in the reconstruction efforts.

Thousands of party members in the capital, organized into different divisions, boarded trains headed to Hamgyong on Wednesday as they were seen off by working people, according to the official Korean Central News Agency (KCNA).