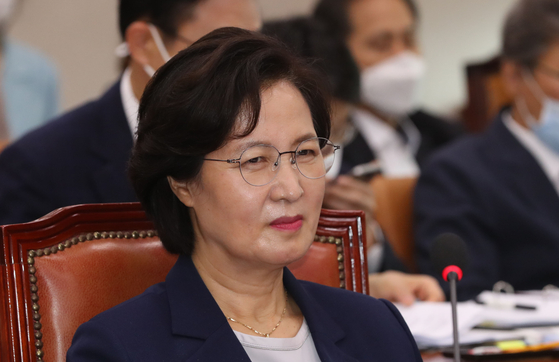 
The whistle-blower who made the initial accusation that Justice Minister Choo Mi-ae’s son received preferential treatment during his military service said he is willing to testify at the National Assembly.

Choo’s son, whose surname is Seo, served in the Korean Augmentation to The United States Army, or Katusa, for the 2nd Infantry Division of the U.S. 8th Army from November 2016 through August 2018. Suspicion has grown that Choo had abused her power to seek favor for her son while she was chairwoman of the ruling Democratic Party (DP), although both of them have denied the allegations.

The scandal started earlier this year, when opposition lawmakers said Seo had been let off the hook when he went AWOL in June 2017. After the lawmakers filed a criminal complaint in January, the Seoul Eastern District Prosecutors’ Office started a probe, but no progress has been announced.

As the investigation appeared to be dragging on, whistle-blowers began talking to the media about special treatment Seo had allegedly received. Former members of Seo’s unit said Choo’s aide had telephoned the military to request an extension when Seo failed to return to duty at the end of a medical leave.

“Seo is lying because he trusts his mother’s power,” one of the whistle-blowers was quoted as saying by Rep. Yoon Han-hong of the main opposition People Power Party (PPP), who provided the information to the JoongAng Ilbo. That whistle-blower was identified as a former sergeant who was in charge of roll call on the day when Seo failed to return to his base.

“If the National Assembly says I should testify, I will go and testify,” he was quoted as saying. “I am worried that there is an attempt to cover up or bury the evidence.”

Seo took his first medical leave from June 5 to 14, 2017, for knee surgery. He extended it to June 23, but did not return to the base. He used four additional personal days after the extension.

The former sergeant has told media, including the JoongAng Ilbo, that he had telephoned Seo and told him to return to the base at the end of his medical leave, but Seo failed to do so. He also said a captain, who was not a member of the Katusa unit, later appeared and ordered him to mark that Seo was using his personal vacation days.

“I did talk to Seo on the phone,” he said. “I was in charge of roll call on June 25. [Katusa soldiers] don’t do roll call on Fridays and Saturdays, so we realized he was missing on Sunday [June 25].”

Seo’s lawyers recently denied that Seo had ever talked to that sergeant on the phone. They said Seo had already extended his leave by using personal days from June 24 to 27 and that there was no need for him to talk to anyone in charge of roll call.

“Everything the whistle-blower says is a lie,” the lawyers said in a statement on Sept. 2, 2020.

The former sergeant said he was already questioned by the Seoul Eastern District Prosecutors’ Office in June. “The prosecutors asked me if I had any evidence [that I had called Seo],” he said. “I told them that it is the prosecution’s job to search the communication records.”

“If you look into the records of telephone calls made from the base or Seo’s mobile phone record, you can confirm my account,” he said.

The whistle-blower said he had given prosecutors sufficient evidence to prove his location on June 25, 2017, including a GPS mark from a social network service that he was in the base in Uijeongbu, northern Gyeonggi.

He also submitted messages he had exchanged with other fellow soldiers through social media. According to the messages, shared by Rep. Yoon, he wrote after 9 p.m. on June 25, 2017 that Seo had taken a “fake medical leave to reschedule his return from Friday to the next Wednesday.”

He also wrote, “I wish Choo Mi-ae was my mother.”

“We will make sure this issue will be scrutinized at the upcoming hearing of the National Assembly,” he said.

Meanwhile, a new allegation has emerged that Choo’s aide had asked the Ministry of Foreign Affairs to help her daughter to obtain a student visa to study in France in 2017, also when she was the party chairwoman.

“We are looking into the matter,” said Foreign Ministry spokesman Kim In-chul on Tuesday. “If the request was made directly to the Foreign Ministry, it would have been easier to find out what had happened. But it seems that officials dispatched to the National Assembly and diplomats at the Korean Embassy in France could be involved, so we are checking on various issues.”

Choo allegedly requested a Foreign Ministry official dispatched to the National Assembly around August or September 2017 for help. The aide reportedly said the date of Choo’s daughter’s entrance to a university in France was approaching quickly, and that her student visa needed to be expedited.

A source close to the administration said the aide must have done so without Choo’s order.

“The aide served Choo for a long time and was close to the family,” the source said. “The aide must have acted independently to help the daughter.”

Choo was a member of the Foreign and Unification Affairs Committee of the National Assembly in 2017. Because the committee oversees the Foreign Ministry, she could be criminally charged for abusing her power and making an improper request.

“Getting a visa [of another country] cannot be done by making a request to our Foreign Ministry,” the lawyer said.

One suspicion after another