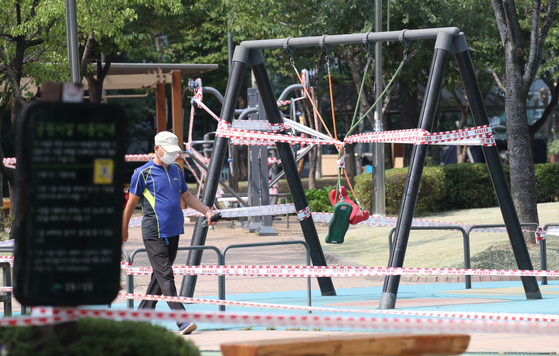 A playground in Gangdong District, eastern Seoul, is closed Wednesday, after a cluster of coronavirus infections was traced to at a call center nearby. [YONHAP]

Health authorities said Wednesday if daily new coronavirus cases remain steady through the rest of this week, the so-called Level 2.5 social distancing measures for Seoul, Incheon and Gyeonggi could be lifted as planned on Sunday midnight.

If those measures are lifted, it would mean coffee shops, bars and restaurants could go back to allowing customers to eat and drink within their establishments after 9 p.m. Greater Seoul, however, would remain under Level 2 within the three-tier social distancing rules until Sept. 20, along with the rest of the country.

Wednesday’s optimistic announcement from the Central Disaster Management Headquarters came a few hours after the Korea Centers for Disease Control and Prevention (KCDC) announced that 156 new Covid-19 patients were detected nationwide on Tuesday, up from 136 the day before.

It was the seventh day in a row that Korea’s daily new cases stayed below 200.

“We’re definitely seeing fewer patients, and daily cases have dipped to the stable range of between 100 and 200,” Sohn Young-rae, an official at the headquarters, said in a Wednesday press briefing.

If the public maintains its focus on social distancing through the weekend, he suggested that a more subdued outbreak could allow the government to let the Level 2.5 measures to expire.

A final decision on the Level 2.5 measures will be made in the coming days, Sohn said, a call that would hinge on the virus situation in the Seoul metropolitan area and the rest of the country.

In the same breath, he warned people not to crowd riverside areas and parks, and urged members of the public to stay home during the upcoming Chuseok holidays, stressing that not visiting their relatives at all was a way to practice “filial piety” this year. 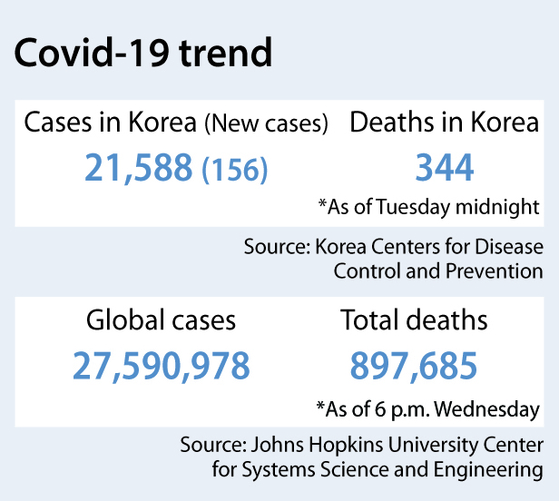 Out of 156 people diagnosed with the coronavirus Tuesday, 144 were locally infected, while the rest were infected abroad, the KCDC said.

Among the local infections, 51 were in Gyeonggi, 48 in Seoul, 17 in Gwangju, eight in Daejeon, five in South Chungcheong, four in Ulsan, two each in Busan, Daegu and Sejong City and one each in Incheon, North Chungcheong, North Jeolla, South Jeolla and South Gyeongsang.

Of the imported cases, four were from Russia, three from the United States, two from Uzbekistan and one each from Qatar, Ukraine and Algeria.

By Tuesday at midnight, Korea had counted 21,588 coronavirus patients in all.

Korea’s latest outbreak was primarily caused by two clusters last month, one that emanated from the Sarang Jeil Church in Seongbuk District, central Seoul, and another from an antigovernment rally held on Korea’s Aug. 15 Liberation Day in Gwanghwamun, central Seoul.

Several right-wing groups have announced plans to hold a series of anti-Moon Jae-in rallies on Oct. 3 Foundation Day in downtown Seoul despite disapproval from the government. Prime Minister Chung Sye-kyun warned Wednesday that organizers will face stern legal consequences if they take to the streets.