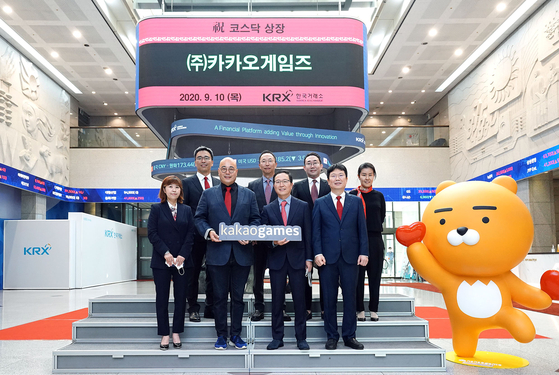 
Kakao Games hit its daily increase limit of 160 percent on its first day of trading on the Kosdaq market.

By market capitalization, Kakao Games is now the fifth largest company on the Kosdaq, ahead of pharmaceuticals company Celltrion.

The game company debuted strong on the Kosdaq. It opened at 48,000 won ($40), double its initial public offering (IPO) price of 24,000 won and at the 200 percent limit set by the exchange for first trades.

Within the first five minutes, the price spiked to its intraday trading limit of 30 percent and reached 62,400 won. It closed at that level.

At the end of the company's first trading day, its market capitalization was 4.6 trillion won. Even after the market closed, 27.5 million orders were waiting in line.

Trade volume was light, with 500,899 shares worth 31.2 billion won exchanged, as investors held back on their shares expecting a further increase in price, Korea Exchange data showed.

Prices are expected to continue upward, despite concerns of a possible overvaluing of Kakao Game’s stocks backed by the popularity of IPOs from retail investors, according to analysts.

“Market watchers consider the adequate market capitalization for Kakao Games to be in the mid-100-billion-won range. If it hits the market cap once more, that number will shoot up to 6 trillion. That could be a bit much compared to its estimated value,” said analyst Lee Jin-man, SK Securities.

Kakao Games’ price-to-earnings ratio (P/E ratio), which indicates the valuation of the stocks, showed signs of the stock price overheating. Large cap shares normally post a 20 to 30 P/E ratio. In the case of Kakao Games, that number was a whopping 316.75.

Established in 2013, Kakao Games is a big publisher in both the mobile and PC games segment. The company also owns the Kakao Friends intellectual property.

Analysts say Kakao Game’s biggest strength is its ties with KakaoTalk, the most widely used messenger app in Korea, since it can utilize the network for marketing. According to Hanwha Investment and Securities, more than 13 million users receive advertisements from Kakao Games through the app.

Kakao Games says it will invest the capital raised from the IPO in strengthening its in-house game development sector. It has 10 new games in the pipeline, with two — Elyon and Odin — published by Kakao Games expected to land by the end of this year.

In response to the listing, its biggest shareholder and parent company Kakao's share price inched up 0.39 percent.