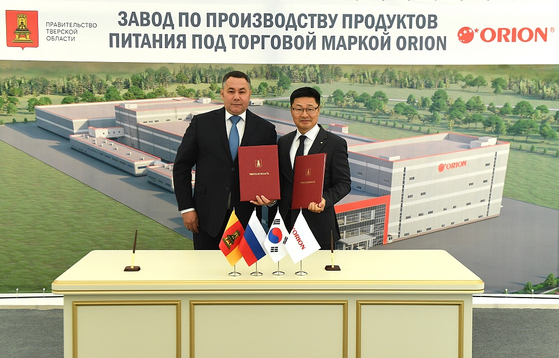 Park Jong-ryul, general director at the Russian subsidiary of Orion, right, and Tver Region Gov. Igor Rudenya during an event to celebrate Orion’s plan to establish a new factory in Tver by 2022. [ORION]


Russia's appetite for Choco Pies is more than just marketing spin. It's so real that Orion, maker of the pie, is building a third factory in the country.


A signing ceremony with the government of Tver, where the factory is to be located, was held on Wednesday, even though construction has been ongoing since July. The ceremony was delayed due to Covid-19.

Orion already has a factory at Tver. It will eventually be moved into the new factory.

The company also has a factory at Novosibirsk, Siberia. Orion declined to say how much the new factory will increase its total capacity in Russia.

The new factory at Tver, 162 kilometers (101 miles) northwest of Moscow, will be finished by 2022. In addition to the Choco Pie, six types of biscuits and two other snacks will be made there.

Orion started exporting Choco Pies to Russia in 1993. The factory at Tver was built in 2006, and the factory in Novosibirsk was completed in 2008.

The company says that demand is so great it needed to build a new factory.

Orion to raise prices of 16 products from Thursday