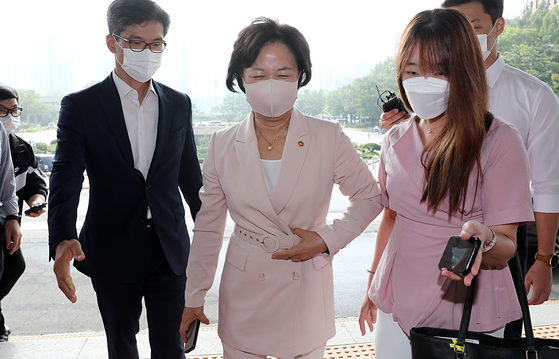 Justice Minister Choo Mi-ae, center, is hounded by reporters as she goes to work at the ministry on Thursday. [YONHAP]


An opposition lawmaker released a Defense Ministry document that appeared to suggest Justice Minister Choo Mi-ae sought to get an extension of a medical leave for her son, amid an ongoing controversy about alleged preferential treatment he received while serving in the military.

In a release Thursday afternoon, the Ministry of National Defense said they could not confirm a record released by Rep. Kim Do-eup of the opposition People Power Party (PPP) that said Choo and her husband apparently filed a request by phone with the military to extend their son's medical leave for knee surgery from June 4 to 14, 2017, for additional days.

Instead, the ministry said the twice-extended medical leave Choo's son, surnamed Seo, eventually took was entirely legal. A ministry spokesperson said any serviceperson was allowed to take up to 30 days in medical leave in the event of an injury or illness, and that such a leave could be extended for a maximum of 20 days with permission from a commanding officer.

The statement undercut claims by the conservative opposition that Choo’s son — presumably with the backing of his mother, who was chair of the ruling Democratic Party (DP) at the time — had failed to return to duty at the end of his leave.

Choo’s son, surnamed Seo, was serving in the Korean Augmentation to the United States Army, or Katusa. He extended the medical leave until June 23 and then used regular vacation rights allotted to him to rest another four days before returning to his unit.

PPP lawmakers claim Seo broke rules by calling his base to extend his leave rather than obtaining an additional permission from a military hospital before extending his leave. Anonymous whistle-blowers also claimed to media outlets that Choo or one of her aides had called the military personally to ask for the extension.

Those additional four days have become the subject of intense partisan wrangling, with the PPP calling for a special prosecutor to be assigned to investigate the matter given the sluggish pace of an ongoing probe of the issue by the state prosecution service.

The Defense Ministry’s response on Thursday addressed the opposition’s claims one by one, noting that Seo’s call to his commanding officer to extend his medical leave was within legal bounds. An additional medical assessment by a military hospital was not required as Seo was not taking leave to be interred at a civilian hospital, the ministry added.

A leaked record written by one of Seo’s commanding officers, a master sergeant, regarding his leave also showed the officer had suggested Seo use his personal vacation days first before later obtaining a necessary medical assessment to validate his leave.

As to whether Choo or an aide called the military to obtain the extension, the ministry said it could not verify whether there had been a phone call, but appeared to suggest some sort of request had been made on the matter.

Opposition lawmakers also took issue with a medical note filed by the doctor who diagnosed Seo at a hospital. In the note, which became the basis for the soldier’s weeks-long medical leave for knee surgery, the doctor wrote that Seo’s knee issue could be sufficiently treated at a military hospital but that Seo wanted to take a 10-day leave for treatment at a civilian center.

Several media outlets and PPP representatives jumped on the note to suggest Seo exaggerated his medical issues to obtain a medical leave, and that undue influence may have been exercised by Choo to make this happen.

That doctor on Thursday, however, told the JoongAng Ilbo that he never received any such pressure nor request, and that he had not even known Seo was Choo’s son at the time.

As to whether he believed Seo’s medical condition was serious enough to warrant the sick leave, the doctor said he could not comment further as he could not sufficiently recollect the case.