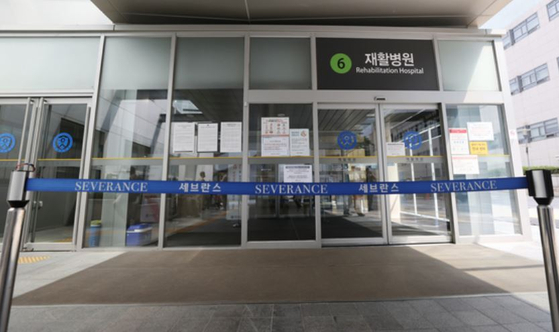 The Rehabilitation Hospital at Severance Hospital in Seodaemun District, western Seoul, is placed under cohort isolation Thursday after several coronavirus infections were traced to the building. [YONHAP]

At least 17 coronavirus patients have been traced to Severance Hospital in Seodaemun District, western Seoul, since Wednesday, health officials said, raising concerns about one of the nation’s largest hospitals.

Ten infections were reported among employees of the hospital’s nutrition team in charge of serving food to patients, while the rest of the infections came from the Rehabilitation Hospital — among nurses, patients, their relatives and caregivers.

Health authorities said Thursday that the two clusters seem to be linked, though exactly how is unknown.

The nutrition team workers, dispatched from a subcontractor of the hospital, were stationed in a different building, but contact tracing is underway to figure out whether they had direct contact with people at the Rehabilitation Hospital, officials noted.

Among the 17 infected people, the first to have been diagnosed was a worker on the nutrition team who tested positive on Wednesday.

The Rehabilitation Hospital was placed under cohort isolation Thursday — the shutting down of an entire building or institution to prevent a possible spread of the virus. Health officials said all patients, their caregivers and workers inside the building would be tested for the coronavirus.

The rest of Severance Hospital remained open for outpatient services.

The cluster emerged as the Korea Centers for Disease Control and Prevention (KCDC) announced Thursday morning that 155 infections were detected nationwide Wednesday, barely under the 156 cases detected the day before.

It was the eighth day in a row that daily cases were under 200.

Among Korea’s 17 major cities and provinces, Sejong City was the only place that had zero new patients.

Of the imported cases, two each were from the United States, Uzbekistan and Russia, while one each was from the Philippines, Kazakhstan, India, Japan, Kuwait, Ecuador, Kenya and Australia. 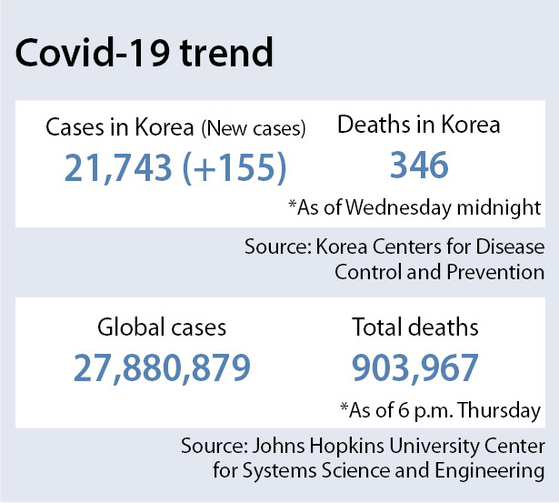 As of Wednesday at midnight, Korea’s total number of Covid-19 patients had reached 21,743.

While daily cases have significantly dropped from late last month’s 300 to 400 cases, Yoon Tae-ho, an official at the Central Disaster Management Headquarters, said in a Thursday press briefing that this week’s day-to-day infections were “tricky” for central health authorities wondering whether the “Level 2.5” social distancing measures should be lifted.

The greater Seoul area — Seoul, Incheon and Gyeonggi — have been under Level 2.5 restrictions since Aug. 30, while the rest of the country has been subject to Level 2 measures in the three-tier social distancing system.

“We’ve been maintaining daily new cases between 100 and 200 for eight days in a row now, but we want the figure to drop more than that,” Yoon said in a Thursday press briefing.

“If the figure drops below 100, it would be a very positive sign, one we [central health authorities] would crucially take into consideration when deciding” whether to lift the Level 2.5 measures next week, he continued.

The last time Korea’s daily infections were under 100 was Aug. 12, the same day the first infection was discovered at the Sarang Jeil Church, which soon swelled into the second-largest cluster Korea has seen to date. At least 1,167 patients have been traced to the church cluster.

As flu season nears, health authorities also urged people to get flu shots as soon as possible, warning many flu symptoms were similar to those of Covid-19, which could make it difficult to distinguish between the two when coming down with either.