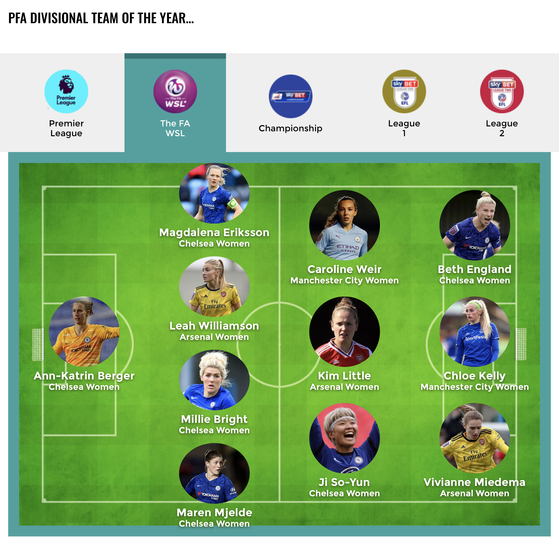 Chelsea midfielder Ji So-yun was named to the PFA Team of the Year 2019-20. [SCREEN CAPTURE]

Chelsea midfielder Ji So-yun has been named as one of the eleven players in the PFA Team of the Year for the 2019-20 season.

Chelsea are well represented in the Team of the Year after finishing the 2019-20 season at the top of the table following a dominant performance that saw them play the entire 15-game season without losing a single match.

Chelsea teammate England won the PFA Player of the Year award, for which Ji was also nominated. Ji previously won the award for the 2013-14 season.

PFA awards are presented by the Professional Footballers' Association and are voted on by the players themselves.

The Women's Super League 2020-21 season kicked off on Sept. 6, with Chelsea drawing their opening game against Manchester United. Chelsea will be back in action on Sept. 13, facing Bristol City at home.