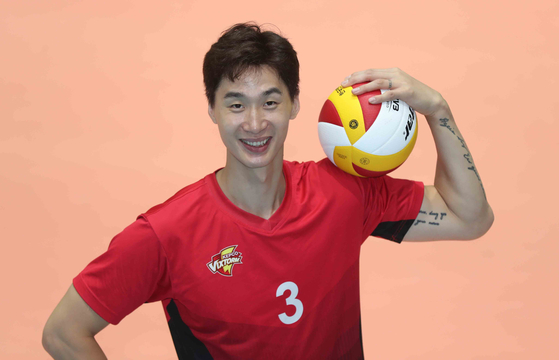 Park Chul-woo joined the struggling Suwon Kepco Vixtorm this season with one goal in mind: Victory.

For the past two seasons, Vixtorm has been considered one of the weakest teams in the Korean Volleyball Federation (KOVO), as they failed to qualify for the playoffs and finished dead last in the regular season standing. This season, things are looking a little different.

Park has lived up to his promise, already helping the Vixtorm win the KOVO Cup, a preseason tournament, by defeating the Incheon Korean Air Jumbos 3-2 at Jecheon Gymnasium in Jecheon, North Chungcheong, on Aug. 29. Park played a significant role in leading the team to victory.

When the 2019-20 season ended earlier than expected, Park became a free agent (FA) for the second time in his career and signed with the Vixtorm.

He earned his very first FA status back in 2010 and signed with the Deajeon Samsung Fire&Marine Insurance Bluefangs. At the time, his signing received a lot of attention as the Bluefangs’ head coach Shin Chi-yong, who now serves as the head of the National Training Center in Jincheon, North Chungcheong, was also Park’s father-in-law.

It’s been 10 years since Park's first FA status. This time, he says, he feels less pressure.

“Unlike that time, I feel a little more comfortable,” Park said.

“At the time, [the team I signed with was] the team we were competing against and there was a lot of talk. [But now] head coach Chang Byung-chul and the coaches don’t give me any pressure. Also, my teammates are trying to help me.”

After spending years as a Vixtorm coach, Chang was appointed as head coach of the club last year. Since being appointed, he has been working to rebuild the team with younger players. Despite his focus on developing younger players, Chang still decided to sign KOVO veteran Park, who is in his late 30s, because the team needed a leader.

“Chul-woo is like a bridge for communication [with players],” Chang said.

Having won the KOVO Cup, the young Vixtorm players can get excited about the upcoming season, but both the head coach and Park said it’s not time to get excited just yet. Although the Vixtorm will play the same clubs as they did at the KOVO Cup, their record at the cup does not carry over to the regular season.

Due to this, Park says that it’s time to work even harder.

“Whenever I won, we only celebrated for like five minutes and then started preparing for the upcoming season,” Park said. “To be honest, during the league [regular season], other teams will get better. But I came to Vixtorm to win.”

At 35, Park is definitely no longer one of the league's youngsters. As volleyball requires a lot of jumping, blocking and spiking, Park knows that he's now playing with a very different body compared to back in his heyday.

“My body doesn’t feel as light as back when I was in my 20s,” Park said. “It’s O.K. when I’m jumping to attack, but when I jump to block, my body feels heavier than in the past. But I’m satisfied about [being able to play] volleyball.“

To keep up his physical strength for the upcoming season, Park has tried different things.

“[In 2016,] when I was [fulfilling my military duty as] a public service worker, I lowered my body fat and increased my muscle mass. But that didn’t seem to suit volleyball. Last season, I tried to be a vegetarian. It did make my body feel lighter, but I couldn’t jump as high. So now, I just focus on eating regularly and giving myself enough rest.”

Looking at the Vixtorm’s performance in the past two seasons, they’ve only managed to pick up 10 wins throughout 68 matches.

But with the fast development of their young players and the addition of Park, the struggling club is hoping to finish in the middle of the regular season standing this year.

To do so, head coach Chang has chosen Park as the Vixtorm’s captain.