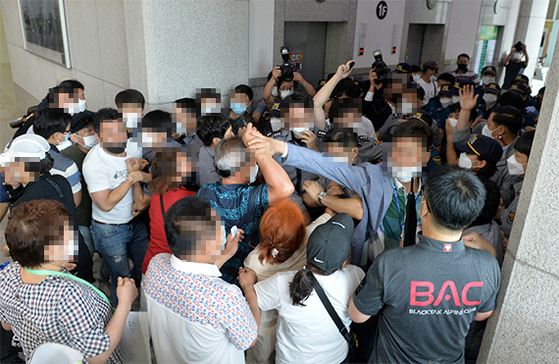 
The news of a fourth supplementary budget, which focuses on supporting small businesses, has not been received well by a large part of its target audience, as small business owners say the focus should be on rent control and boosting demand.

“Our loss from the two weeks of Level 2.5 social distancing exceeds 10 million won. Does the government think that one month’s rent is enough?” said Kim, who owns a seafood restaurant in Gongdeok-dong in Mapo District, western Seoul. “It seems like nothing more than patting itself on the back.”

The government on Thursday announced its decision that of the 7.8-trillion-won ($6.6-billion) supplementary budget, 3.8 trillion won will be used for disaster emergency relief grants for roughly 3.77 million people. Some 3.2 trillion won of that amount will be given as cash grants of up to 2 million won to 2.91 million self-employed businesses.

The social welfare component of the budget, which includes provision for a 20,000-won payment toward smartphone bills for everyone aged 13 or older, has also garnered frustration. For many scrambling to pay the rent, a phone bill discount is not much help.

For the main chunk of the budget, the lack of consideration for different sizes of businesses is a major area of complaint among self-employed business owners.

“Even within the same building, rent varies based on the location and size of the restaurant. It does not make sense that a store that pays more than 10 million won on monthly rent receives the same amount as a small shop that pays 2 million won,” said Kim. “I wish the government would help with rent control.”

Facilities that have been designated as high-risk and banned from opening, such as PC rooms and coin noraebang, or booth-type singing rooms, struggle to cover fixed costs including rent and interest on loans. For a larger PC room in a bustling area, the monthly rent is close to 24 million won.

“If the government lifts the ban, I will return the 2 million won of emergency relief grant,” said Choi Yoon-sik, chair of the Korea Internet PC Culture Association (IPCA). “The ban on PC rooms, which have dividers installed between users, and not on restaurants, makes me think the government is only interested in pleasing the public.”

According to the IPCA, 30 PC rooms are going out of business every day.

“The government has not disclosed the rationale for designating coin noraebang as high-risk facilities,” said Kim Tae-rim, the secretary general of the Korea Coin Musicroom Association. “The association demands that the designation as well as the ban on the operation of coin noraebang is lifted.”

“I could no longer make ends meet, so I sold my business after lowering the premium on rent,” said Park, who runs a bar in Yeouido, western Seoul. Two weeks ago, Park put a pause on his business and started a part-time delivery job at Coupang Eats.

In a survey conducted by Alba Cheonguk, a website for part-time job hunters, 59 percent of 234 business owners responded that they have considered closing after the Level 2.5 social distancing started. Twenty six respondents, or 11 percent, actually closed their businesses. Within the high-risk group, which includes 12 types of facilities, the rate was 69 percent.

Based on a survey of associations representing 22 high street businesses, the Federation of Korean Industries (FKI) estimated that over the second half of 2020, they will face an average 42 percent on-year drop in net profit. If Level 3 social distancing comes into effect, the amount rises to 52.6 percent.

“During the early months of the year, the demand for photography businesses is usually high from events like the start of school, weddings and other family events, but this year, it’s close to none,” said a spokesperson for The Korean Professional Photographers Association. “Even beyond a severe impact, the industry is decimated. I hope there will be a variety of solutions for small businesses, like allowing transactions for photo shoots via gift vouchers.”

Regarding the government support measures for high street businesses, 42.8 percent said the government should focus on boosting demand and 25 percent responded that it should provide monetary support.

“The high street is hanging on by a thread,” said Yoo Hwan-Ik, director of the FKI’s industry department. “Not only is the immediate financial support for small business owners urgent, but there also needs to be a comprehensive policy for reviving consumer sentiment.”