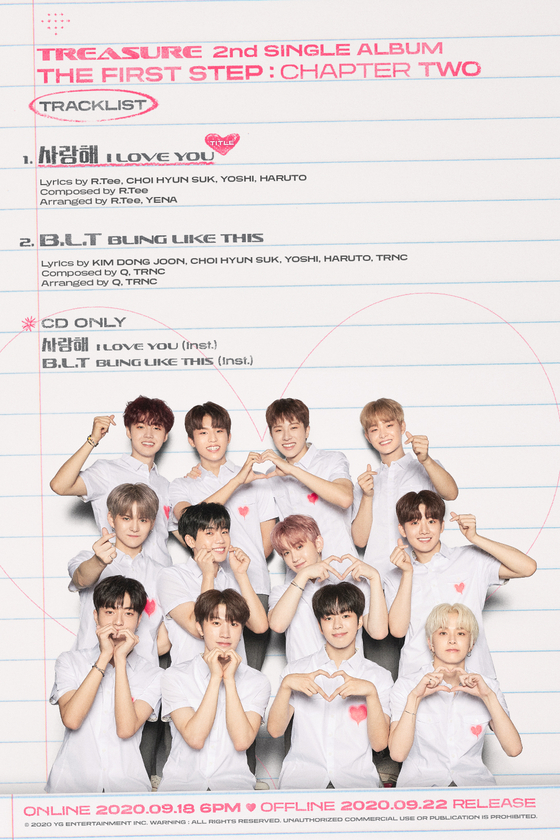 
Rookie boy band Treasure said its second single will be even more powerful than its first on Friday while revealing the track list for its upcoming release set to drop on Sept. 18.

According to the band's agency, Treasure's second single titled "The First Step: Chapter Two" will include two tracks: the lead track "I Love You" and "B.L.T (Bling Like This)."

Members Choi Hyun-suk, Yoshi and Haruto took part in writing the lyrics for both of the songs and producer R.Tee, who also penned the band's debut song "Boy," wrote the music.

The track list poster of the second single featured members of Treasure wearing school uniform-style costumes and making heart shapes with their hands and fingers, showing a "pure and refreshing side of the members," according to the agency.

Other details of the songs were not revealed, but the agency said that the new track will be "even more powerful than 'Boy.'"

Treasure made its debut on Aug. 7 with its single "The First Step: Chapter One," storming charts in and outside of Korea with its strong lead song.

Treasure is the first rookie band to debut under YG Entertainment in four years after girl group Blackpink launched in 2016.

The tracks of the second single will be released on Sept. 18 and sales of hard copies will start on Sept. 2.