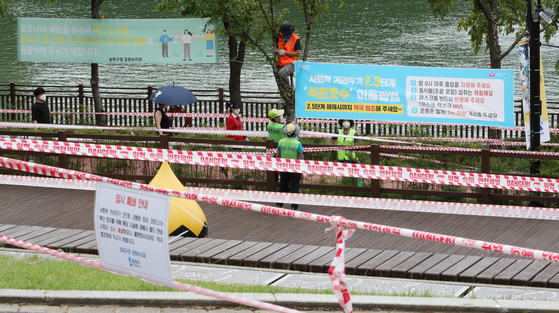 
The government on Friday banned rallies scheduled to be held by conservatives in central Seoul to mark National Foundation Day on Oct. 3, in response to fears of another spike in coronavirus cases.

The National Police Agency (NPA) issued no-assembly orders for 78 rallies with more than 10 participants set to take place within prohibited zones. Police have received 291 requests to hold rallies on Oct. 3.

The move was reported by the NPA to the Central Disaster and Safety Countermeasure Headquarters that day.

Since Aug. 21, the Seoul Metropolitan Government has enforced a ban on gatherings of more than 10 people in the capital as a part of its social distancing measures to contain the spread of the new coronavirus.

A massive antigovernment rally on Liberation Day in Gwanghwamun Square on Aug. 15 resulted in at least 557 subsequent coronavirus infections.

Nine civic groups reported plans to hold 32 rallies with more than 10 participants in central of Seoul on Oct. 3. Six of those groups held similar antigovernment protests on Aug. 15.

For the ninth consecutive day, Korea's new virus cases stayed below 200 on Friday, though it remains unclear if the government will extend Level 2.5 social distancing measures beyond this weekend.

Korea added 176 new coronavirus cases, of which 161 were local infections, slightly higher than the tallies in recent days.

Korea has confirmed a total of 21,919 Covid-19 cases as of Thursday midnight, according to the Korea Centers for Disease Control and Prevention (KCDC), and four more people died, bringing the total death toll to 350.

There are 175 patients in critical condition.

At least 23 coronavirus patients have been traced to Severance Hospital in Seodaemun District, western Seoul, as of Friday, according to the Seoul Metropolitan Government.

So far, 11 cases have been linked to the Asan Medical Center in southern Seoul this month, the latest being a pregnant woman who gave birth Thursday.

According to Asan on Friday, the woman in her 30s admitted to medical personnel immediately that she had suffered from cold symptoms for the past four days before visiting the hospital. She was moved to an isolation ward and confirmed Covid-19 positive after safely giving birth to her child. The baby tested negative but was also put in isolation.

The Seoul city government said that it will inspect 2,030 religious facilities in its 25 districts Sunday to make sure they are abiding by quarantine guidelines.

The Central Disease Control Headquarters said Friday that in the past month since Aug. 12, 34 percent of new Covid-19 patients have been over the age of 60.

According to the World Health Organization (WHO), Covid-19 can be more severe in people older than 60 years or who have existing health conditions like lung or heart disease, diabetes or immune system problems.