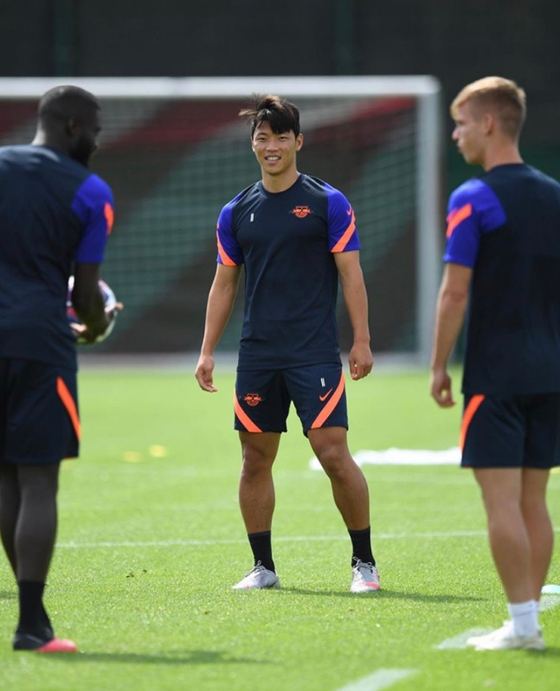 Hwang Hee-Chan trains with the RC Leipzig squad in this picture posted on the club's Instagram page on Aug. 4. [SCREEN CAPTURE]


RB Leipzig forward Hwang Hee-chan looks likely to be in the squad for his new side’s first match of the season after manager Julian Nagelsmann praised his playing style in multiple interviews this week.

In a press conference in German on Thursday, Nagelsmann reportedly said that Hwang is a definite candidate for the squad’s first competitive match against FC Nurnberg in the DFB-Pokal cup on Saturday. The regular Bundesliga season is due to start on Sept. 18.

“[Hwang] is a player who is very [difficult] to defend. Not one that will score 35 goals, but one that will hurt the opponent a lot due to his speed and low center of gravity,” Nagelsmann was quoted as saying on RBLive.

The Korean forward joined RB Leipzig this year after spells at Hamburger SV and FC Liefering on loan from FC Red Bull Salzburg. Last season Hwang scored two goals across 20 appearances for Hamburger SV. He is also a regular on the Korean team and was a member of the 2018 Asiad winning squad.

Speaking to ESPN on Zoom earlier this week, Nagelsmann acknowledged that Leipzig will struggle to fill the gap left by Timo Werner, who scored 28 goals last season before moving to Chelsea this season. Again, the Leipzig manager mentioned Hwang.

“We have a success in Hwang, who makes a lot of runs behind the defensive line,” Nagelsmann said.