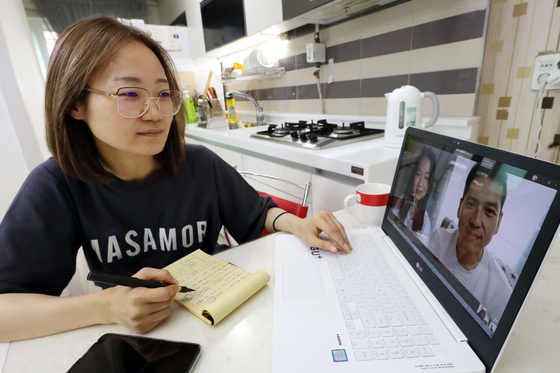 An LG U+ employee works from home. [YONHAP]

But workers at small companies — especially in manufacturing — continue to come to work and risk exposure to the coronavirus, according to a survey by the Korea Enterprises Federation (KEF) released on Sunday.

Among 69 of the top 91 companies by annual revenue, 88.4 percent said many of their office workers are working from home.

Nine big state-owned companies were not included in the survey.

The survey was conducted on Sept. 7 and 8.

The survey found that 44.4 percent of the companies adopted systems in which employees took turns working at home.

Some 27 percent of the companies designated certain categories of employees to work at home — such as workers who are pregnant or have underlying health conditions — or accepted applications to work at home.

Only 15 percent made all employees work from home beyond those considered essential to be in the office.

A majority said employees working from home didn’t have a major negative impact on productivity.

However, 10.6 percent said productivity was low, falling 70 percent or more.

The survey found that 77.6 percent of the companies made increasing use of IT programs including messenger apps.

Some Korean telecommunication companies have been introducing new programs for working from home.

However, employees of smaller companies continue to face risks on the job.

Workers on production lines can't do their work from home.

“We have never even considered the possibility of working from home,” said an official of an SME parts supplier for Samsung Electronics in Giheung, Gyeonggi who requested anonymity. “We always face risks of being exposed to the coronavirus. The only defense we have is taking precautions.”

However, companies said they are taking precautionary measures such as increasing paid leaves or holidays, adjusting break times and even changing commuting hours to help workers avoid crowds.

Among the 69 companies that participated in the survey, 53.2 percent said they were certain that working from home will likely continue in some form even after the coronavirus pandemic, while 33.9 percent didn't think so.

‘Untact’ for Chuseok and Oct. 3

If you have to stay at home, go shopping