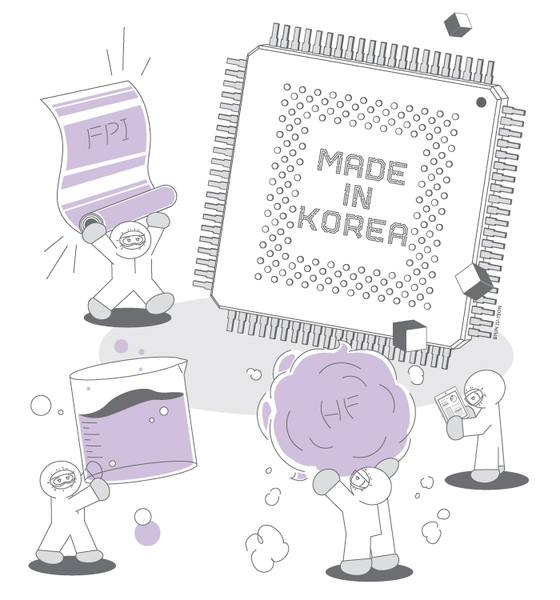 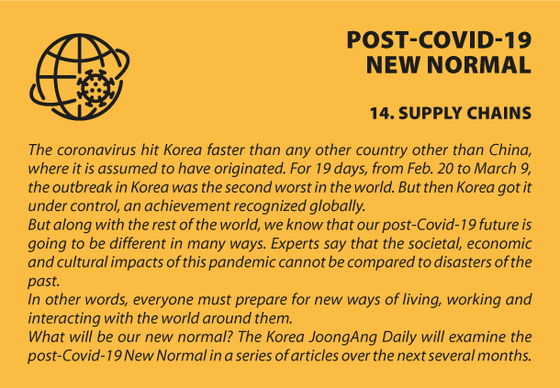 As the coronavirus pandemic hit the global economy and manufacturing hubs like China went into lockdown, the extent to which Korea relies on foreign suppliers very quickly became clear.

The shutdown of factories abroad triggered shortages of parts for major manufacturers in Korea, pushing companies like Hyundai Motor to suspend factory operations back in February.

That production stopping on the other side of the world could so quickly bring Korean manufacturers to their knees exposed just how important localizing suppliers is. Producing essential parts and materials at home was a hot-button political issue even before Covid-19 arrived, after Japan imposed restrictions on exports to Korea of three key materials last year. 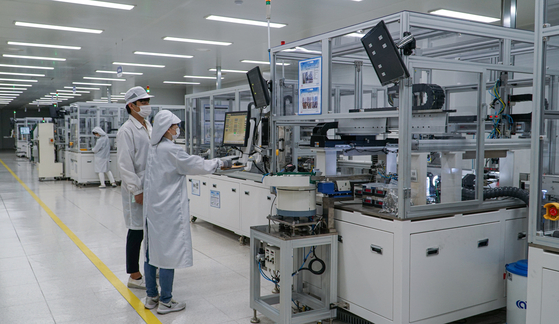 On Aug. 20, this reporter visited the Daeyang Electric factory in Incheon, where chips, springs and other parts are assembled to produce automotive pressure sensors.

Asked if the company has been suffering with its supply chain during the pandemic, Noh Sang-soo, managing director at Daeyang’s sensor division, was surprisingly blase.

“Not at all, we produce all the important parts like chips in this factory," said Noh. "So it was not that difficult to produce the sensors, even at the peak of the pandemic.”

Daeyang is the first and only Korean company to manufacture the pressure sensors used for car braking systems, primarily using its own technology. That makes Daeyang an outlier in Korean manufacturing — a self-sufficient company unaffected by global supply chains.

The government is investing trillions of won into creating a lot more Daeyangs.

The Ministry of Trade, Industry and Energy announced a suite of supportive measures in July aimed at incentivizing local companies to make materials, parts and equipment in Korea.

The proposal pledges up to 7 trillion won ($5.9 billion) through 2022 to implementing the measures, ranging from bank loan subsidies to establishing an industrial cluster and exempting the fees needed for industrial standard certification.

The government is also advocating “reshoring” to encourage companies with production sites overseas to bring the facilities back to Korea, an initiative that comes with a 1.5-trillion-won commitment through 2025.

Government agencies are identifying specific product segments that urgently need support and nurturing well-performing small- and medium-sized enterprises (SMEs) that have a proven track record of localizing parts and materials.

The government allocated 1.56 trillion won of its annual budget to the ministry for next year, up 21 percent from the previous year.

A large part of the subsidies and resources will prioritize 100 strategically important parts and materials that are currently heavily dependent on foreign supplies.

These items include hydrofluoric acid and other materials used in manufacturing automotive sensors, rechargeable batteries and optical lens.

The Industry Ministry said in July that it will extend the list to more than 300 items to include future-proof sectors such as biopharmaceuticals and robotics.

The government agencies are on track to select start-ups and well-performing SMEs — whose business focus and capacity is aligned with the specified materials — for an extensive package of funding and support over the next five years.

“We thought it is more efficient to foster companies with a track record of being successful in producing important parts and materials, instead of nurturing early-stage companies,” said a government official from the Ministry of SMEs and Startups who led the selection process.

Those companies are entitled to receive funding for research and development, expedited certification procedure, loans with favorable interest rates and an advantageous status when competing for state-run projects. 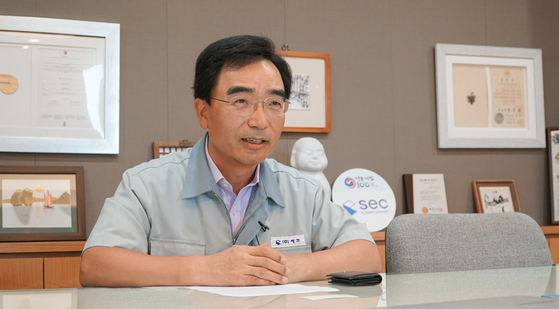 The government thinks the role of small- and medium-sized enterprises is critical in moving important supply chains back home and covering a wide range of parts and materials.

Indeed, SMEs, including micro-businesses and self-employed people, account for 99.9 percent of all registered businesses in Korea, at 3.5 million, with a workforce that takes up 82.2 percent, or 14 million people.

Daeyang Electric benefited from the state-run support package after it started producing its automotive pressure sensor module, a key part to measure pressure and translate it into an electrical signal, in 2014.

As a late starter, the Korean company tried to develop its competitive edge with low pricing and better repair services for corporate clients.

“It was critical to obtain the core technology behind the component to enhance quality and lower the price,” said Noh. “After the successful mass production in 2014, we now supply our pressure sensor to Hyundai Motor and Kia Motors through partner Mando.”

X-ray equipment manufacturer SEC is another company to benefit from the government scheme, and it is also looking to expand its offering to different industries.

“The possible uses of X-ray inspection systems are countless,” said CEO Kim Jong-hyun during an interview at the company’s headquarters in Suwon, Gyeonggi.

The X-ray inspection systems are designed to scan finished products in order to detect micro-scale defects of electronic parts. SEC’s X-ray equipment is currently used in the final manufacturing stage for semiconductors and smartphone batteries.

“We will go on to supply key components tailored for the health care field, which is one of the most lucrative industries with a high barrier to entry, and three-dimensional automated X-ray inspection for EV batteries,” Kim said.

The government is focusing on fostering suppliers for semiconductor-related parts and equipment, given that Korea is home to leading chipmakers like Samsung Electronics and SK hynix.

ATI developed its own technology to produce an inspection system for semiconductor wafers.

“The business was dominated by the United States and Israel, but we localized the core technology that once depended on overseas suppliers,” said Jang Sung-min, head of public relations division at ATI.

The Incheon-based company, also benefiting from the government scheme, has Samsung, SK hynix and Micron as its clients.

The government hopes to strengthen competitiveness in new business areas such as robotics.

In line with that aim, RS Automation made it on the list of beneficiaries as its business is focused on robotic motion control and drive systems.

Motion control refers to the software component of a robotic system that determines how a robot should move to carry out different tasks.

“The robot motion control and drive business will play a central role in establishing smart factories and developing robots,” the company said in a statement. “Some of RS Automation’s technologies managed to pull off a comparable level of performance to top-tier products in Japan."

To ensure a stabilized supply system in the long run, those companies should grow, according to Kim In-chul, a researcher from the Korea Institute for Industrial Economics and Trade.

“Korea needs to enter the new sectors impacted by the supply chain disruption worldwide. […] In the longer term, after the coronavirus pandemic, there needs to be measures that could help SMEs increase exports through a global value chain.”


Where it all began

This push to localize isn't new territory. The trade spat with Japan had already exposed Korea’s vulnerable lack of self-sufficiency before the coronavirus pandemic.

The three materials that Japan curbed exports on — photoresists, hydrogen fluoride gas and fluorinated polyimide — are all critical substances in either the semiconductor or display production process.

Korea's self-sufficiency rate for parts, materials and equipment in general was stuck in the mid-60 percent range from 2011 to 2017, according to the Korea Association of Machinery Industry.

Looking at the industries affected by Japan's measures, semiconductor showed the lowest rate at 27 percent, according to a report released by Korea Institute for Industrial Economics and Trade in 2018.

“There are 400 to 600 steps in the overall manufacturing process of semiconductors that require hundreds of materials and equipment, Korea’s self-sufficiency rate is merely 27 percent due to its reliance on stable supply chain abroad,” the Industry Ministry assessed in its report last September.

Display had the second lowest self-sufficiency rate, at 45 percent.

When the coronavirus pandemic reached Korea in February, a lot more industries were quickly affected.

As most production lines in China came to a standstill, Korea’s manufacturers whose parts are produced in the neighboring country were put on high alert.

One auto part that was immediately at risk was the wiring harness, a bundle of electric wires inside a vehicle. Hyundai Motor Group has three suppliers for wiring harnesses, all headquartered in Korea, but they all have production bases in China.

The matter was eventually resolved with the automobile company switching to wiring harnesses sourced from domestic and Southeast Asian factories, but the risks it exposed cast doubts over the fragility of global value chains and the international fragmentation of production.

“Multiple countries’ economies have become tightly interconnected through global value chains, sometimes converting noneconomic risks into ones that affect the economy,” said Kim from the Korea Institute for Industrial Economics and Trade.

“The coronavirus pandemic is a good example of the phenomenon since the virus, which is a noneconomic risk, paralyzed the global supply chain and drove down consumer sentiment,” Kim said in a report released in April.

In this high-stakes situation, major Korean companies played an integral role in addressing the lack of supplies.

Except for photoresists for extreme ultraviolet lithography, Korean companies were able to build up their own technology to replace the Japanese supply for two restricted items — hydrogen fluoride gas and fluorinated polyimide.

SK Materials announced in June that it succeeded in localizing hydrogen fluoride gas, a key material that was 100 percent imported.

Hydrogen fluoride gas, also known as etching gas, is used in gas or liquid form to clean surfaces or etch patterns on semiconductors.

“The factory started producing the polyimide last May, and the move was not directly related to Japan’s move,” said a spokesperson at Kolon Industries.

SK Chemical, a 41-percent subsidiary of SK Holdings, has been carrying out tests in Jincheon, North Chungcheong, to supply fluorinated polyimide.

Photoresists, which are used to form circuit patterns on chips, were 92 percent produced in Japan. Although no domestic company has been able to produce the material, import sources have been diversified to include Belgium and Germany.

SK Materials is also planning to finish building its factories for argon fluoride by next year, to begin producing the substance in 2022.