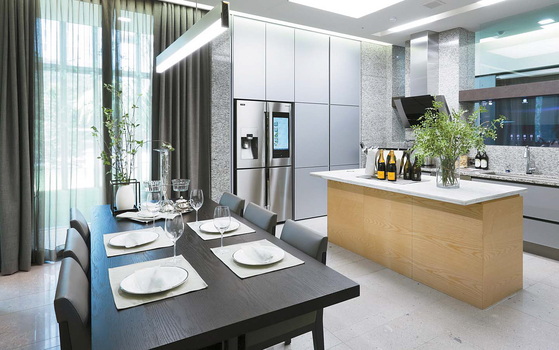 A model home for Raemian with IoT features. [JOONGANG PHOTO]


The first thing that catches your eye when you stand by the Han River, or anywhere that’s known to have a great view of Seoul like Lotte World Tower, are the domino-block-like apartment complexes everywhere. In a country like Korea where about half the population lives in apartment buildings, it is no surprise to see so many cookie-cutter buildings.

In the past two decades, people's wants and needs for their apartments have changed — in turn leading to changes in newly built complexes, especially, since the arrival of brands from local construction companies.

Raemian is the first brand a construction company put in front in 2000 to start the new era. Since then, many other companies followed suit to create a brand instead of naming its newly built apartment after the company’s name. GS Engineering and Construction unveiled Xi, which it still carries, while Daelim has e-Pyeonhan Sesang, which translates to “comfortable world,” as well as the more luxurious brand Acro. Daewoo Construction has been pushing its Prugio apartment complexes as well as officetels and Hyundai Engineering and Constructionhas The H brand from Hillstate.

Besides the brands, the companies have competed against each other to give their concrete creations a feeling of luxury by using "castle" or "tower" in their names. For example: Lotte Castle, Brown Stone and Royal Palace.

“With such brands coming out in the market, it has become important for construction companies to create the right image for its brand to make better sales,” said professor Lee Chung-kee of architecture at the University of Seoul.

“The focus is more on what image each brand portrays when it comes to choosing the apartment more so than what features each brands offers inside the apartment complex.” 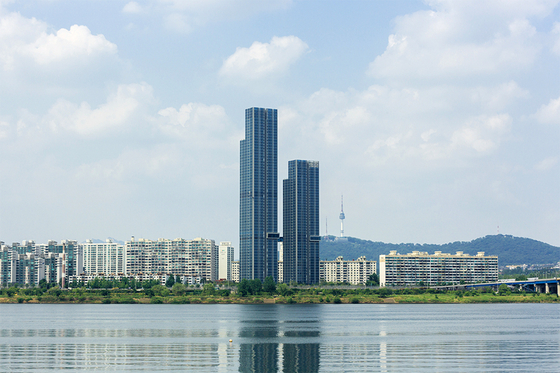 The updates over time


Up until the 1990s, the layouts of apartment units and what features they came with were very simple. That is simply because, even without any add-ons, units were selling very well whenever new apartment complexes were introduced to the market, said architect Hahn Jong-ruhl, who is also the vice president for the International Union of Architects.

Samsung C&T, which launched the brand Raemian 20 years ago, said people used to see apartments as an asset and as something to own in the early 2000s. Reflecting such a trend, the company started to focus on providing more added value. To make the brand better known, it started making the exteriors of its apartment complexes different with colors and logos to help the Raemian buildings stand out even from afar and give a proud sense of ownership. 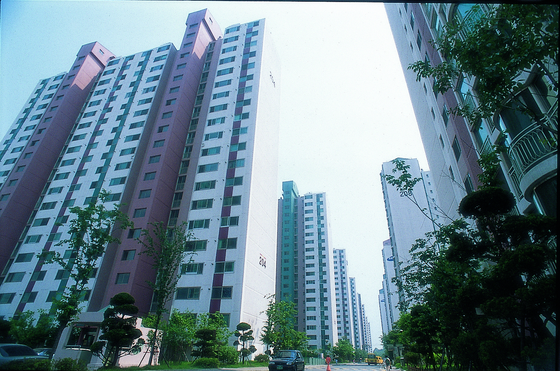 The first ever apartment to be named Raemian in Suwon, Gyeonggi. [SAMSUNG C&T]


It has tried to provide “trust” to residents and minimize any inconveniences.

“In 2005, to provide different services to residents, we launched a service brand called ‘Hestia’ to help residents with the maintenance issues they face over time, and to provide them with a chance to learn and share [things with neighbors],” said Samsung C&T’s communications team, adding that it has even offered opportunities to residents to make donations and help others in need. 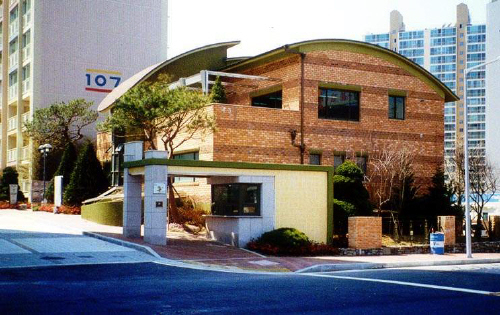 A management center built to look similar to a cafe in Uiwang, Gyeonggi, in a file photo from 2001. [JOONGANG PHOTO]


It has also collaborated with designers like Andre Kim to research ways to make its residents more satisfied in terms of style while constantly marketing its brand.

Entering the 2010s, people started to also focus more on their quality of life during their search for an apartment. The arrival of Banpo Raemian in Seocho District, southern Seoul, in 2009, has further driven the push for apartment complexes to provide convenient features, on top of the value as an asset. Floorplans of units started to become more varied to better cater to the different needs of potential residents, as well as facilities offered inside the complex. 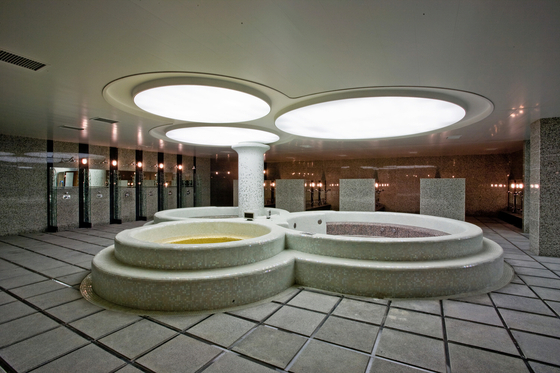 
Throughout a decade, Raemian slowly moved more toward introducing new communal facilities, like spas and guest houses, as well as other facilities for residents to take advantage of during their leisure time.

The attention on eco-friendly lifestyles has also pushed the company to add more green energy options to its complexes, such as charging stations for electric cars and solar panels set up on the roof.

After trying to bring more style into its apartment units, now the brand is expanding to make living more convenient than ever before with all kinds of cutting-edge technology related to the internet of things (IoT). With the slogan “Next Raemian Life,” it connects the services it has provided over the past 20 years to online platforms.

The exterior of some buildings are used as artistic facades, while others have lower floors that have been designed to function as shopping streets.

Considering more people worry about clean air with issues regarding ultrafine dust, the buildings have been equipped with features like air filters.

Breakfast and lunch services are possible thanks to a communal restaurant exclusive for residents, alongside a lounging area and a cafe, and some other pet care and health care services for the elderly are also available.

The arrival of virtual reality tools had made it possible for people to view inside their future homes in more convenient ways, which has become especially convenient during the pandemic period.

“As people’s lifestyles at home have started to change with the spread of the coronavirus, we are working on new floor plans and communal options,” said Samsung C&T. 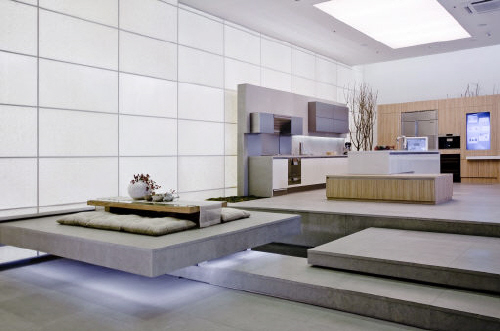 A model home from 2009 with features inspired by the cutting-edge technology at the time. [JOONGANG PHOTO]


The company is considering including balconies where people can dine to feel nature from the comfort of their own homes, as well as having home offices for work and study. Communal spaces will have one-person pools or more private gyms, and glamping sites will be available for residents to spend enjoyable time outdoors, but safely.

“So far, the home has been a place where rest is offered, but now it will become the space where residents can accomplish their life goals,” said the company, adding that people will probably tend to spend more time at home. “The home will be the place where both office work and house chores are done or even educational activities."

Architect Hahn added that features people enjoy in nature will more gradually be brought into individual homes in apartment complexes.

“Although many have preferred to get rid of any balcony space to make their living room or other rooms bigger, now they will go back to having the balcony once again to grow plants and do activities with children,” said Hahn.

“The layout and functions of units will be updated to cater better to what’s needed at home as the lifestyles of residents change overall over time.” 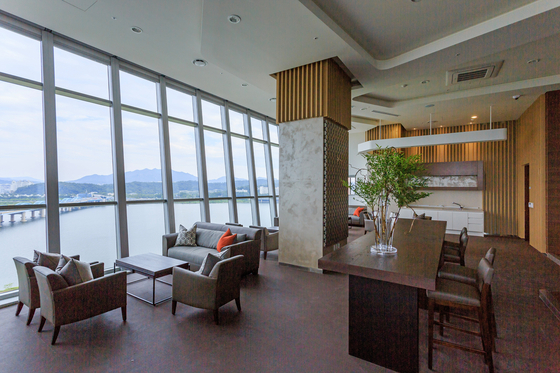 
The quest is not finished even after you find the apartment of your dreams. Many now find themselves making adjustments, big or small, with an interior designer to make the satisfying exterior match the inside of their homes.

Since the units inside aren’t too different from one another, many add touches to make the space one-of-a-kind. Some simply add furniture that fits their personal taste, while others make bigger adjustments like adding new doors to separate certain spaces.

Decades ago, the final touches were led mostly by what was offered by the construction companies that were building the apartment complexes, according to interior designer Jung Eun-joo. Model houses they set up to introduce certain new apartments were the barometer to check the new trends in home decor, and many often asked to do something similar to what they had seen at such places.

However, nowadays, with lots of images available on Pinterest, Instagram and other social media platforms, residents more boldly pursue their own personal interior style.

“There are about seven to eight styles of a big trend, and within that category, people develop their own micro styles to create something that's solely their own and what they favor,” said Jung.

“What’s commonly known as a living room doesn’t have to always work as a [lounging area], and any room can become a dining room by mixing and matching different things in different spaces."

For instance, a bedroom still carries the function of where people sleep, but added-on facilities have been changing such as adding walk-in closets which have a washer and dryer right next to them for the ultimate convenience.

Creating a photo zone inside the home is a request that has risen to the surface in the past couple of years as more people want to share photos online.

“Home has been the most important place in people's lives especially over the past six months as people spend more time than before in their homes, and it has become the place where a variety of content is being created,” said Jung, adding that some want a wall to take pictures of their child as they grow while others look for decorative items to share with others online.

“The most important thing to many is to get out of the uniformed design and life that comes with living in apartment units that are all the same.”

Seoul property prices both up and down, depending on source