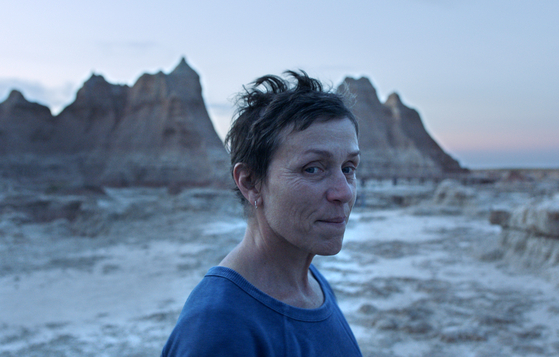 
Chloe Zhao's "Nomadland," a recession-era road trip drama starring Frances McDormand, won the Golden Lion for best film Saturday at a slimmed-down Venice Film Festival, which was held against the backdrop of the coronavirus pandemic.

Zhao and McDormand appeared by video from the United States to accept the award, given virus-related travel restrictions made reaching the Lido in the Italian lagoon city difficult if not impossible for many Hollywood filmmakers and actors.

"Thank you so much for letting us come to your festival in this weird, weird world and way!" McDormand told the masked audience as the Italian marketing team for the film actually accepted the award. "But we're really glad you let us come! And we'll see you down the road!"

Britain's Vanessa Kirby won best lead actress for "Pieces of a Woman," a harrowing drama about the emotional fallout on a couple after their baby dies during a home birth. Italy's Pierfrancesco Fabino won best lead actor for "Padrenostro," (Our Father), an Italian coming-of-age story that takes place after a terrorist attack in the 1970s.

The Russian film "Dear Comrades!" about a 1960s era massacre in the former Soviet Union, won a special jury prize while Chaitanya Tamhane won best screenplay for "The Disciple," about an Indian man's pursuit to be a classical vocalist.

That the 10-day Venice festival took place at all was something of a miracle, given that northern Italy in late February became ground zero for Europe's coronavivrus outbreak. The Cannes Film Festival was canceled and other big international festivals in Toronto and New York opted to go mostly online.

But after Italy managed to tame its infections with a strict 10-week lockdown, Venice decided to go ahead, albeit under safety protocols that would have previously been unthinkable for a festival that has prided itself on spectacular visuals and glamorous clientele.

Face masks were required indoors and out. Reservations for all were required in advance, with theater capacity set at less than half. The public was barred from the red carpet and paparazzi, who would normally chase after stars in rented boats, were given socially distanced positions on land.

While it's too soon to say if the measures worked, there were no immediate reports of infections among festival-goers and compliance with mask mandates and social distancing appeared to be high.

"It's a moment of rebirth for everyone, for the whole world," said Emma Dante, the Italian director of the in-competition film "The Macaluso Sisters." "This festival is really an important moment of encounter, of beginning to dream again and be together again, even with the norms and following all the safety protocols."