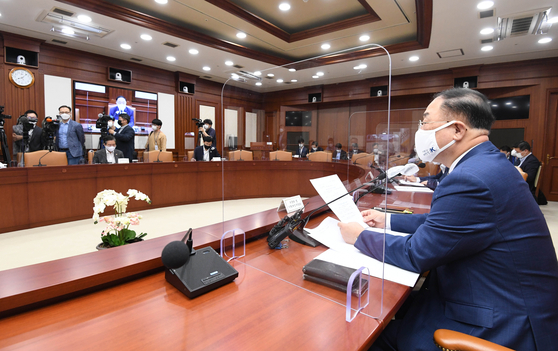 
Products from small Korean companies are to be pushed globally via Amazon and other online malls with support from the government and the distribution might of large Korean companies.

The goal is to help smaller Korean companies hit by the economic impact of the pandemic.

“We will create a new system in cooperation with seven popular overseas online malls including Amazon,” Finance Minister Hong Nam-ki said during the government economic ministers meeting on Monday.

Hong said the initiative is just one element of the government's efforts to support small companies struggling to maintain exports.

“In the second quarter, the overall export of SMEs [small- and medium-sized enterprises]when compared to the same period a year ago shrunk 13.5 percent,” Hong said. “However, online exports have surged 128.9 percent.”

He said online exports have contributed to the export recovery of SMEs.

On Friday, Gmarket said it has been working with the government in support of SMEs to introduce its products on three major online malls — eBay and Singapore's Qoo10 and Shopee — since the beginning of the month. The service includes registering the products on these sites as well as translations.

Hong raised concerns about the increase in countervailing duties imposed on Korean companies.

“The scope of investigation has gone from products to companies,” Hong said.

According to the government, while there were seven countervailing duties imposed against Korean companies in all of 2017, as of September this year, 10 have been imposed.