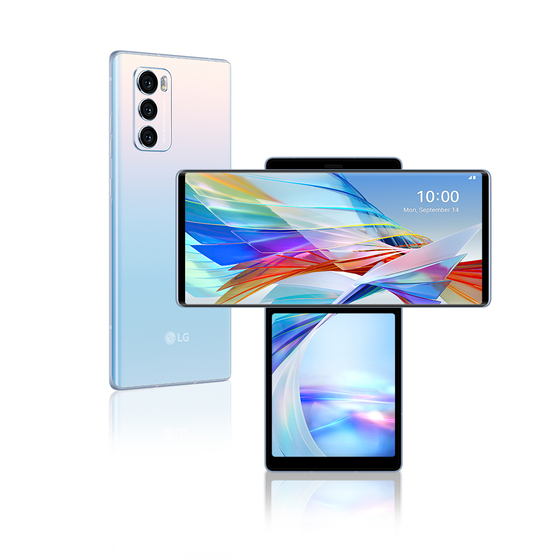 After months of speculation, LG Electronics' rotating Wing smartphone will arrive in Korea next month, the company announced Monday.

And it doesn't rotate after all. It swivels.

LG Electronics finally shared the detail of its latest handset in an online event Monday, confirming, among other things, that it is called Wing.

The official price tag was not revealed, with a spokesman saying it has not yet been decided. Local media has reported that the phone is expected to be priced a little over a million won ($845), significantly cheaper than the Samsung Galaxy Z Fold2, at 2.4 million won.

As hinted in LG’s video teasers, the 6.8-inch OLED top display can be rotated 90 degrees in a clockwise direction, exposing a smaller, square-sized screen underneath that, when deployed, makes the entire thing look like a "T."

In Swivel Mode — which is how LG describes the phone when the hidden screen has been rotated out — the two screens can be used for a single app or two apps. This means users can browse the internet and message friends while watching YouTube videos, but also use the smaller second screen as a remote control to fast forward or pause.

The T-shaped device can be used in various orientations, as seen in a leaked video which showed the top screen being used for a navigation app and the smaller screen to receive a phone call.

The top screen has a notch-less design with no camera to be seen. Instead, the 32-megapixel selfie camera is hidden behind the main screen and can pop out when needed.

On the back, the LG Wing has three cameras ranging from 12 to 64 megapixels. A feature LG introduces on the rotating smartphone is what it calls the “Gimbal” motion camera, taking its name from the pivoted device used for filming. This allows the user to hold the T-shaped smartphone with one hand while maintaining a stable video feed, LG said.

The device weighs 260 grams, which is 20 grams lighter than the Galaxy Z Fold2. The company used an aluminum alloy as the main material, along with the same technology found in its famously lightweight laptop, LG gram. It is 10.9 millimeters (0.4 inches) thick, around two millimeters slimmer than the Fold2.

The Wing is powered by Qualcomm’s Snapdragon 765G 5G — the U.S. chipmaker’s first application processor to integrate a 5G modem chip. The smartphone contains 8 gigabytes of RAM and 128 gigabytes of internal memory. An external memory card can be inserted to extend this by maximum 2 terabytes. It has a 4,000 milliampere-hour battery.

There are two color options: illusion sky and aurora gray.

In the past year, LG Electronics has been shaking up its smartphone business, which has been in the red for years. Last year, it relocated production facilities for mobile devices overseas in a cost-cutting effort. It also unveiled its first two dual-screen phones in 2019.

The new Wing is the first mobile release since the company announced earlier this month that it was working on a two-track strategy for its premium smartphones. "Explorer" devices — innovative and unconventional, like the Wing — and more traditional "Universal" phones.

“The Explorer Project is a challenge that will lead a new generation,” said Lee Yeon-mo, who heads LG Electronics’ mobile communications division. “As LG Wing marks the start of this project, we will grow with the market by offering experiences to customers that are looking for new adventures.”