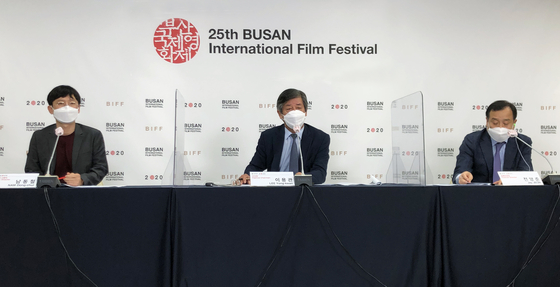 From left, festival programmer Nam Dong-chul, chairman of the festival’s board of directors Lee Yong-kwan and executive director Jeon Yang-jun participated at an online press event to explain about the two-week postponement of the 25th Busan International Film Festival (BIFF) on Monday. [BIFF]


The organizing committee of the 25th Busan International Film Festival (BIFF) apologized for the sudden delay of the largest annual international film festival in Korea, but said that the decision was inevitable.


“It’s a shame that after waiting for a year, we are seeing each other [online] wearing masks, in the midst of the Covid-19 pandemic,” said Lee Yong-kwan, the chairman of the festival’s board of directors in an online press event on Monday. “From May, we’ve tried to host the festival normally in line with social distancing Level 1, but due to a sudden change of circumstances [meaning a recent spike], for over a month now we’ve deliberated over whether or not we could actually host the festival. [The board] decided that it was crucial to be careful about [the possibility] of another spike of daily coronavirus cases during the Chuseok holidays, and we had no choice but to postpone the event for two weeks.

“Please understand that we’ve reached the decision after much consideration, and that it was inevitable,” Lee emphasized.

With Covid-19 infections refusing to die down since August, the BIFF committee announced on Friday that the festival will be postponed for two weeks and that all offline events including the opening and closing ceremonies, panel discussions and outdoor events are canceled. Receptions, parties and networking events for global filmmakers and organizers were also canceled. Instead the festival will focus on screening the invited films at the Busan Cinema Center.

A total of 192 films from 68 countries were invited to this year’s festival.

“We have decided to screen the precious 190 films that we have received from Asia and Europe at the Busan Cinema Center,” executive director Jeon Yang-jun said. “We’ll do our best for the screenings to be held offline until the end of the festival. The selections will be screened once per film."

The opening film is an omnibus titled “The Story of Hong Kong” by seven prestigious Hong Kong filmmakers such as Sammo Hung and Tsui Hark. The film portrays Hong Kong in different eras from the 1950s to the present day. Japanese filmmaker  Kotaro Tamura’s “Josee, the Tiger and the Fish” was selected to be the closing film. The film is the animated version of Isshin Inudo’s 2003 film.

BIFF also left open the possibility for the festival to be canceled completely if social distancing remains at Level 2 or higher.

“If Covid-19 gets worse, I think we will have to cancel the festival,” Lee said. “We are not prepared to move the event online, and since our invited films are centered on world premieres, it would be difficult to adjust the films to be screened online.

“If such a situation does arrive, we will look for more possible ways [for audiences to see films]. We have deeply felt the need for the festival to come up with substitute interactive methods in this 'untact' society. If we are not able to host this year’s festival, we will not look for ways to transit to online. Our principles are similar to Cannes. We have to take into consideration basic orders such as the films’ copyrights, filmmakers’ and audience’s decision.”

The 25th event is currently scheduled to take place from Oct. 21 to 30.