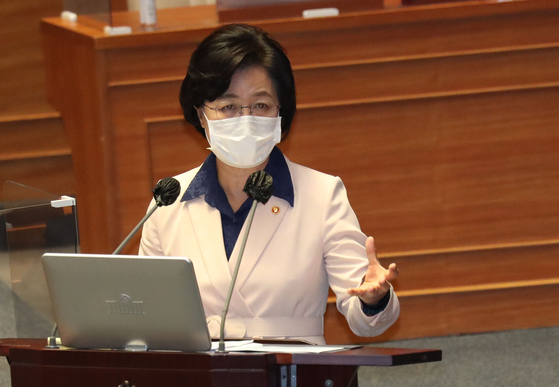 Justice Minister Choo Mi-ae, accused of abusing her power, answers questions from the National Assembly during its plenary session on Monday. [YONHAP]


A sergeant who said he witnessed attempts to win preferential treatment for Justice Minister Choo Mi-ae's son from the military on Monday asked the government to protect him as a whistle-blower, according to the Anti-Corruption and Civil Rights Commission.

“We received a report earlier in the morning that the [whistle-blower] requested protection from the commission,” a spokesperson for the commission, the government body overseeing civil complaints, said Monday. “His request is being reviewed by an internal committee at the commission.”

Korean law allows whistle-blowers to seek protection if they have reported their case to the police, prosecution, the commission, Board of Audit (BAI) or any other government body with investigative authority.

“The internal committee will review if the whistle-blower had done this in December [when he divulged information],” the spokesperson said.

The whistle-blower, identified as former Sergeant Hyun, was the first to bring to light the allegations that Choo’s son received preferential treatment during his military service, when he tipped off the opposition lawmakers in time for Choo’s confirmation hearing as justice minister in December.

They alleged that Choo’s son, whose surname is Seo, was let off the hook when he went AWOL in June 2017, taking twice-extended medical leave for knee surgery. Seo served in the Korean Augmentation to The United States Army, or Katusa, for the 2nd Infantry Division of the U.S. 8th Army from November 2016 through August 2018.

They claimed Seo broke rules in the process of extending his leave by calling his base, rather than obtaining additional permission from a military hospital. Anonymous whistle-blowers have since told media outlets that Choo, at the time chairwoman of the ruling Democratic Party (DP), or one of her aides called the military to ask for the extension, and that the military also faced pressure to select Seo as one of interpreters for the 2018 PyeongChang Winter Olympics.

By January, opposition lawmakers had reported to prosecutors the allegations that Choo abused her power and that Seo deserted his military post without consent. Choo and Seo have denied the allegations.

As the investigation continued during the intervening months, the identification of the first whistle-blower came under scrutiny over the weekend, when DP Rep. Hwang Hee revealed the full name of the former sergeant in a Facebook post. After intense backlash, he edited the former sergeant’s full name from the post and instead identified him as “Sergeant Hyun.”

However, Hwang told the JoongAng Ilbo on Sunday that Sergeant Hyun’s full name had already been used in the media previously.

“TV Chosun has used his full name and even aired his face to the whole country when they released their interview with him [in February],” Hwang said. “People who are saying that I revealed the full name first are saying that only to attack me.”

Hyun is said to have requested media outlets recently to refrain from airing his previous interviews.

“Hwang described the whistle-blower like a criminal, slandered his good name and is trying to threaten and shut down his attempts to speak out about the matter,” opposition People Power Party (PPP) floor leader Joo Ho-young said during a committee meeting on Monday. “As soon as Hwang revealed the whistle-blower’s name, he was heavily attacked online by supporters of the Moon Jae-in administration.”

Joo added that he will report Hwang to the Assembly’s Special Committee on Ethics for attempting to slander the whistle-blower.

The Assembly’s committee on ethics has the authority to investigate whether a lawmaker has violated any rules in the National Assembly Act and can take disciplinary action against a lawmaker found guilty, including banning the lawmaker from entering a session at the Assembly for up to 30 days.

In the ongoing probe, prosecutors summoned last week Hyun, two lieutenants and a colonel as witnesses in the case.

Seo was summoned on Sunday, the first time since the probe’s launch in January. The questioning was conducted behind doors and only became known after the prosecution announced it on Monday.

Earlier on Sunday, Choo, who has remained publicly reticent to discuss the issue, posted about it on her Facebook account, apologizing to the public for causing trouble but adding that there was “no violation of procedures” when it came to her son’s extended medical leave.

The Defense Ministry said in a statement last week that Seo did not violate any regulations in extending his medical leave by a phone call. It has since been receiving calls, some angry, from parents with their children in the military service.

“A lot of them were calling to complain, saying that they couldn’t extend their sons’ medical leave when they were ill during service,” a source in the ministry told the JoongAng Ilbo on Monday on the condition of anonymity. “But not all of them were angry calls. Some were genuinely interested in if and how they could extend their leaves as well.”

At the plenary session of the Assembly on Monday, Choo was summoned several times to the podium to be questioned about the allegations by lawmakers.