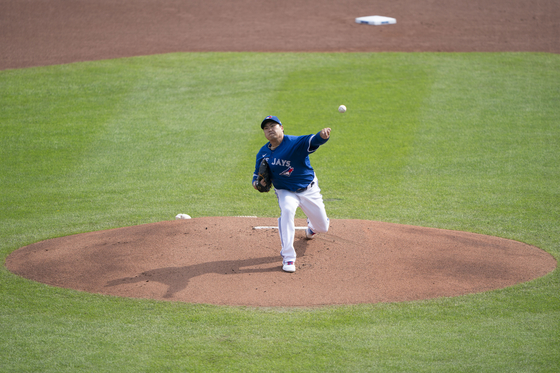 Ryu Hyun-jin of the Toronto Blue Jays throws a pitch during a game against the New York Mets at Sahlen Field in Buffalo, New York, on Sunday. [REUTERS/YONHAP]


Ryu Hyun-jin of the Toronto Blue Jays is back.

The 33-year-old ace pitcher picked up his fourth win of the season against the New York Mets at Sahlen Field in Buffalo, New York, on Sunday. Throughout six innings, Ryu gave up eight hits and one run while striking out seven with no walks.

Hoping to redeem himself from his worst start of the season against the New York Yankees the last time out, Ryu took to the mound in 19-mile-per-hour (31-kilometer-per-hour) winds.

Ryu struggled to adapt to the conditions at the start of the game, giving up a run at the top of the first inning with an RBI single to left fielder Dominic Smith on a line drive to center field, allowing the Mets second baseman Jeff McNeil to score the first run of the game.

Once again, the Blue Jays batting lineup had Ryu's back. At the bottom of the second inning, Blue Jays’ left fielder Lourdes Gurriel Jr. hit a two-run home run off Mets’ starter David Peterson’s change-up, pitched at a speed of 84.7 miles per hour.

“After I’d given up that early run in the first inning, I had to tweak my game plan and the pitch sequences,” Ryu was quoted as saying on MLB.com. “I thought they were on top of the pitches I was making.”

That change in sequence seemed to have worked. From the second inning, Ryu continued to toss scoreless innings and was lifted from the mound after the top of the sixth inning, when the Blue Jays had a 2-1 lead.

The Blue Jays’ batting lineup continued their strong performance with a big inning at the bottom of the sixth, scoring five runs for a 7-1 lead.

The Mets scored two runs at the top of the eighth, but the Blue Jays were already well out in front.

With the Blue Jays’ strong performance, Ryu picked up his fourth win of the season and another quality start, and the Blue Jays picked up a 7-3 victory. This game allowed Ryu to lower his ERA from 3.19 to 3.00.

“Even from now on, I think I’ll have to adapt to different situations inning by inning,” Ryu was quoted as saying. "I think that really helped me in not giving up hard hits or extra-base hits. That really helped me getting through those runners on base.“

Despite Ryu giving up an early lead, his teammates never lost faith. The Blue Jays are a young squad, and the addition of Ryu seems to have helped the lineup up their game in this shortened season.

“We trust [Ryu] 100 percent,” Blue Jays’ shortstop Santiago Espinal was quoted as saying after the game. “We trust him to get out of trouble and, if he doesn’t, we’ve got his back no matter what. It doesn’t matter. We’ve got his back. Every time he pitches, we’re just trying to go out there and give 100 percent from everybody.”

The Blue Jays seem to have gained tremendous confidence this season. As of Sunday’s game, the Toronto team are second in the American League East standing with 26 wins and 20 losses, just 0.5 games ahead of the New York Yankees.

The Blue Jays’ batting lineup has been explosive this season, picking up a huge victory against the Yankees on Sept. 8 with 10 runs only at the bottom of the sixth inning. This was the first time in 10 years that the Blue Jays have scored 10 runs or more in a single inning, and that performance saved Ryu from picking up his second loss of the season, instead walking away with a no-decision.

The Blue Jays will continue their season with a three-game series against the Yankees at Yankee Stadium in New York starting Tuesday night, or at 8:05 a.m. on Wednesday in Korea.